MAP01: Ebb is the first map of 1000 Line Community Project. It was designed by Lord Z and uses the music track "Battle Strategy" by James Paddock (Jimmy), originally used in Plutonia 2. 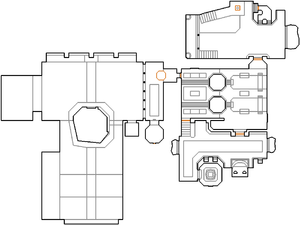 Map of Ebb
Letters in italics refer to marked spots on the map. Sector, thing, and linedef numbers in boldface are secrets which count toward the end-of-level tally.

Take the shotgun then go outside and turn right to confront some zombiemen and shotgun guys, as well as a mancubus on an overhead ledge on Hurt Me Plenty (HMP) skill level or higher. Go through the north-east door to an area with two water pools, kill the imps and cacodemon on guard here then pick up the super shotgun by the north door and go through it to find a grassy area with one or two arachnotrons along with some imps (and revenants on HMP or higher). Go up the steps in the south-west corner then follow the platform to another flight of stairs; at the top is a Hell knight guarding the blue keycard.

Taking the blue key will open an alcove in front of you containing two shotgun guys, or chaingunners on Ultra-Violence (UV) and Nightmare (NM); a cavern will also open at ground level containing demons, plus two spectres on HMP or lower or a mancubus on UV and NM. Go back to the starting area where some demons and cacodemons have been released, then head up the stairs in the north-west corner and open the door at the top to find a mancubus and two demons guarding a chaingun. Open the blue key door near the chaingun to confront two imps and a revenant, then use the lift behind them to go up to a hallway where zombies and a baron of Hell are guarding the exit button.

The data was last verified in its entirety on November 23, 2021.