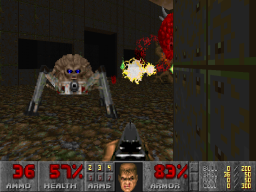 The arachnotron is a spider-like monster introduced in Doom II. It is quite similar to the spiderdemon but smaller and with large eyes that change color depending on the monster's current state (moving, hurt, or attacking). It is supported by a metal chassis and his body consists primarily of a large brain, along with two small arms. Instead of a chaingun it wields a powerful plasma gun that fires bursts of yellow and green energy.

According to the manual: Maybe cybernetics wasn't such a great idea after all. Look what the demons have done with it. It seems unfair somehow you're not the only guy in Hell with a plasma gun.

In Doom II, they make their first appearance in Dead Simple, where the player must fight them when they reinforce the fallen mancubi.

An arachnotron makes a crescendoing mechanical cry (sounds like a machinery powering-up) when spotting a player. Once the arachnotron engages an enemy it will continue to fire until the enemy moves out of its field of view or until the monster flinches in pain or is destroyed. Similar behavior can be observed with the spiderdemon, nazi soldier and the heavy weapon dude. When they die, their heads explode into a morass of gore as their mechanical bodies collapse while unleashing a dying tone that resembles failing machinery.

Although they may seem slow, arachnotrons are actually faster than quite a few of the other monsters and can catch up with the player at an alarming rate. They have a medium pain chance, so rapid fire weapons such as the chaingun will work well, although using the chainsaw on them is very risky. Their attacks are easier to avoid than the rapid-fire hitscan attacks of heavy weapon dudes and spiderdemons, but their plasma bursts are among the fastest projectiles, and their high rate of fire can quickly drain the player's health. Additionally, the plasma bursts can obscure the player's vision upon a successful hit. If a player constantly attacks, moves in broad side-to-side movements, and tries to get out of the arachnotron's line of fire periodically, then the player will sustain minimal damage.

Because of their sustained, extremely fast rate of fire, they are often more than capable of defeating almost any monster if provoked via monster infighting, especially when multiple Arachnotrons attack; however, stronger enemies such as a baron of hell will usually prevail in smaller battles because of their higher health.

In classic Doom, the arachnotron is first encountered on these maps:

The IWADs contain the following numbers of arachnotrons: 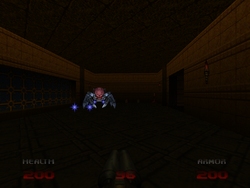