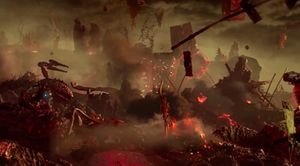 The arachnotron appears at far left in this still from the E3 teaser.

The arachnotron returns as a monster in Doom Eternal, its first appearance in a main-series Doom game since Doom 64, and in any Doom game since Doom II RPG. As with previous versions of the monster, it is a brain-like monster with small, frail arms, equipped with a mechanical chassis that walks on multiple clawed legs like an arachnid, essentially being a smaller version of the Spider Mastermind. Uniquely, this new incarnation carries its plasma gun on a scorpion-like tail which it holds above its body. This tail can be destroyed due to the new Destructible demons gore mechanics, in which case it will not be able to use the gun. Its legs are similar to the Doom 64 counterpart. Additionally, the arachnotron now has blue-colored blood akin to the cacodemon.

The arachnotron attacks using its plasma gun, and is able to cling to walls and ceilings to stay out of reach; if forced into close range or if its gun is destroyed, it attacks by swiping at the Doom Slayer with its leg claws. arachnotrons have been observed firing both continuous direct shots, and a burst of three arcing lobbed shots.

The Doom Slayer grabs one of the arachnotron's legs and forces the claw through the monster's eye.

The Doom Slayer flips the arachnotron onto its back where it dies.