Difference between revisions of "Arch-vile" 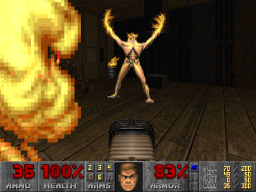 First meeting with the arch-vile in MAP11 of Doom II

Arch-viles are emaciated-looking, yellowish-skinned humanoid figures with a grotesque appearance, including stigmata. They also have no flesh around their abdomens, revealing some of their ribcage. The Arch-viles first make their appearance in Doom II's Map 11. Their manual description is:

One of the worst of a bad lot. You can't think of enough rotten things to say about him. He's fast, hard to kill, casts spells, and resurrects dead monsters! At least these suckers are rare.

Arch-viles can take a considerably high amount of damage (700 hit points, the fourth highest in the game), and their attack consists of a unique ability to immolate their enemies in flames by raising their arms up, summoning fire upon the targeted foe, regardless of range (though they will not use their attack from more than 1024 map units away unless hurt). They then hunch over and clasp their hands together, causing the fire to erupt, usually send the enemy flying into the air, while causing up to 90 points in damage. This attack will always hit the enemy as long as there is a line of sight between the arch-vile and the target, and can be avoided by getting out of the arch-vile's line of sight, which is usually relatively easy since it takes the arch-vile about three full seconds to do one attack, from when it first calls the fire to when it actually sends out the blast. However, if the player moves out of the arch-vile's line of sight and then back in by the time it finishes casting its spell, the player will be affected normally.

Arch-viles are the fastest monsters in the game, almost 50% quicker than even the cyberdemon and a charging lost soul, and meeting two or more of them at once without any cover spells doom for most players. They are also the most resistant monster to pain, which makes canceling their attacks difficult; a point-blank shot with the super shotgun only disrupts their spell 55% of the time.

The arch-vile has the power to resurrect other, lower-level monsters. They can revive all monsters that leave corpses except cyberdemons, spiderdemons, Commander Keens, and other arch-viles. They also cannot revive corpses that were placed on map by the level designer. This resurrecting power makes them top priority to kill in battle, to stop them from reviving monsters and forcing the player to waste precious ammo. However, the player does get credit for killing resurrected monsters, so in levels containing an arch-vile the KILLS percentage displayed at the end may exceed 100%.

Being hit by an arch-vile attack will not provoke other monsters to start infighting, because arch-viles can never become targets to monsters, including other arch-viles. Unlike most other monsters, attacking an arch-vile which is attacking will cause it to change its target to whatever attacked it last. This happens in the same attack cycle. That is, shooting an arch-vile that is occupied with blasting its current target may result in an almost immediate retaliation against the attacker by the arch-vile. Arch-viles are hurt by the blast damage of their own flame attack, so it is possible for an attacking arch-vile to hurt itself or any arch-vile close to its target.

When facing Arch-viles, it is strongly recommended that players should use their most powerful weapons against them-the BFG 9000 will kill them in one hit most of the time, while the Plasma rifle will suppress them from using their attack most of the time thanks to its high rate of fire. The Rocket launcher is also useful at dispatching them, although the player runs a risk of being counterattacked if there are more than one of them at a time. The super shotgun works fairly well also if there is proper cover for the player to hide behind.

Bobby Prince said: "The Archvile is an evil healer. Anyone getting in his way is blasted with fire and disintegrated. This includes other demons. But, after he has wrought his destruction, he then goes around and reanimates all of the demons. Because of this interesting dual personality, I decided to give him a very evil laugh as an active sound. For his death sound, I recorded a young girl saying 'why,' pitch shifted it down and mixed it with other sounds. The Archvile just doesn't understand why anyone would want to kill him as he sees himself as only doing good for his fellow demon." [2]

In the Doom games, the arch-vile is first encountered on these levels:

In Doom RPG, the arch-vile appears as a class of monster. There are three variations, identified by color:

The arch-vile class of monsters are particularly susceptible to axe attacks and also appear to share a similar weakness to the fire extinguisher that lost soul-class monsters do, much the same as in the novelisation of Hell on Earth. They also possess the ability to revive dead monsters, though this will fail if the player is standing on its target's corpse at the time. Something that should be noted is that when attacking, no matter if the arch-vile is an Infernis or Apollyon or just plain arch-vile, it always uses the unmodified costume of the regular arch-vile raising its arms and catching fire.