The arch-vile appears near the center of frame in this still from the E3 teaser, with its arms held up in the classic attack pose. 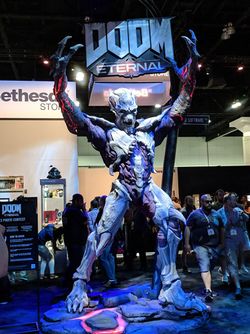 The arch-vile returns as a monster in Doom Eternal, its first proper reappearance since Doom 3. Judging from its appearance, which closely matches its Doom II incarnation's slim, mutilated body, long arms, and gold-glowing, fire-wreathed hands, it will likely attack in a manner similar to the original monster, utilizing fire-elemental spells. Also it was shown to cast lightning spells in the Battlemode demonstration from QuakeCon 2019. It is presently unknown if the summoner will also be retained alongside the arch-vile as a separate monster, and whether or not the arch-vile will be able to resurrect other demons.

Through a statue of the arch-vile which has been featured at E3 2018, it is known that the arch-vile now has yellowish or off-white bone-like plates under which gore and muscle tissue can be seen. Like the original, it has a partially torn-open rib cage and open abdomen, though a significant difference is that its abdomen is filled with gore rather than being completely empty. The arch-vile's hands can be seen to have a network of red-glowing cracks or veins, and when preparing its Hellfire attack they burst into flames along with most of the ground upon which the arch-vile stands.

An arch-vile appears at the end of the gameplay reveal of Doom Eternal, where it seems to channel its Hellfire attack toward the Doom Slayer, as the Doom Slayer brings out a sword that is strikingly similar to the Crucible.