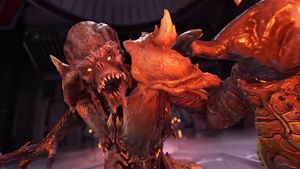 A close-up view of an arch-vile. 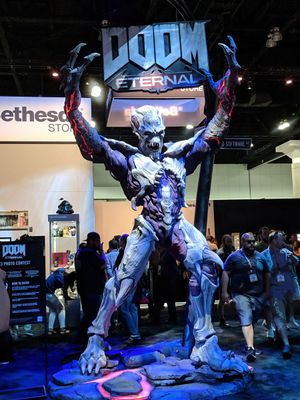 The arch-vile returns as a monster in Doom Eternal, its first proper reappearance since Doom 3. Its features closely match its Doom II incarnation, with a slim, mutilated body, long arms, and gold-glowing, fire-wreathed hands, as well as in its ability to cast fire-elemental spells as attacks. As with the Doom 3 version of the arch-vile, and the summoner of the previous game, rather than resurrecting slain foes, the arch-vile of Doom Eternal summons new enemies into the fray.

Through a statue of the arch-vile which has been featured at E3 2018, it is known that the arch-vile now has yellowish or off-white bone-like plates under which gore and muscle tissue can be seen. Like the original, it has a partially torn-open rib cage and open abdomen, though a significant difference is that its abdomen is filled with gore rather than being completely empty. The arch-vile's hands can be seen to have a network of red-glowing cracks or veins, and when preparing its Hellfire attack they burst into flames along with most of the ground upon which the arch-vile stands. Finally, the arch-vile has magma for blood similar to the baron of Hell.

The arch-vile acts as a monster version of the buff totem, empowering the enemies in its arena with enhanced speed and attack damage as long as it remains alive. They will not summon at random times; instead they wait for when the player executes a glory kill or chainsaw kill as the animation gives them an open window to begin without being instantly interrupted. In the case of multiple arch-viles, at least one will attempt to begin summoning, especially if the player is some distance away from it. While it can theoretically summon an infinite number of monsters, it can only have a limited number of them active at once, and the monsters it summons are drawn from a predefined list linked to the encounter in which it appears; that being said, these monsters may include other Super Heavies such as Tyrants, Doom hunters, or even Marauders. As is the case with the buff totem, the monsters it buffs will glow red. It should be noted that the monsters it summons will not immediately become active; "inactive" monsters sport an orange aura and cannot move or be damaged until the arch-vile finishes summoning them. However, if the arch-vile falters before its summoning is completed, the monsters that would have been summoned will be instantly removed.

It prefers to avoid direct combat, using a fiery magic shield to protect itself from attack and teleporting out of reach while its minions keep the player busy. When teleporting, it leaves a trail of golden mist that will give away its new location. When it has to fight personally, it can attack with flame waves and its signature hellfire move (which generates a pool of flames beneath the player that will deal constant damage as long as they remain in it). When this happens, it will lower its shield and become vulnerable to attack. The magic shield cannot be overloaded with the plasma rifle like that of the shield soldier or carcass, but it can be broken with a blood punch or circumvented with quick movement. When using flame waves, the arch-vile will fire two waves one after the other, and lead its target into the second wave.

Descendants of the eldest race of demons, the arch-viles are masters of infernal magic. Many arch-viles hold elite positions within the demonic hierarchy, both because of their keen intellect and the psychomantic power that they wield. Born rulers, they are well suited to command hordes of lesser demons.

The arch-vile is one of the six playable monsters available in Battlemode. It is able to teleport short distances and moves quickly, and can use multiple fire-based attacks in addition to its shield. Its main role is to reduce the Slayer's movement through judicious use of its Flame Wall and Lake of Fire abilities, cutting off escape routes and forcing the Slayer to fight on the demon players' terms.

The arch-vile appears near the center of the frame in this still from the E3 teaser, with its arms held up in the classic attack pose.

An arch-vile appears at the end of the gameplay reveal of Doom Eternal during a modified version of the Mars Core level, where it seems to channel its Hellfire attack toward the Doom Slayer, as the Doom Slayer brings out the Crucible blade. This encounter is not the case for the final version, as the entrance to the BFG-10000 is inaccessible and the Crucible blade is not obtained until visiting Taras Nabad later in the game.