An armor can be found on a shelf in Level 1: Congo of The Plutonia Experiment. 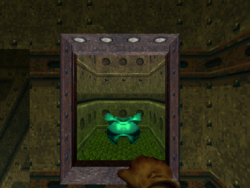 An armor found in a secret room in Doom 64 MAP01: Staging Area

The standard armor (known as security armor in the manuals) is an item that appears in the Doom games as a bright green military vest, similar to the one worn by the player sprite. When collected, it increases the player's armor percentage to 100. It cannot be collected if the player already has at least 100 percent armor. When an armor is obtained, the game displays a HUD message: picked up the armor. According to the manual, it is a light kevlar vest.

The armor will absorb one third (1/3) of all damage received, rounded down, until it is fully depleted. The blue megaarmor, by contrast, absorbs half (1/2) of damage received.

In the IWADs the armor is first encountered on these maps per skill level:

The IWADs contain the following numbers of armors per skill level:

In Doom RPG, the armor is called a flak jacket. It increases the player's armor rating by 25 units.