Difference between revisions of "Ballista" 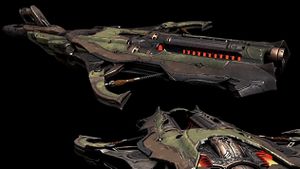 The ballista is a new weapon first occurring in Doom Eternal. It launches kinetic projectiles with results similar to those of a rail gun, and can be charged to fire an explosive bolt which tears apart enemies. It is currently presumed to replace the previous game's Gauss cannon given its similar mechanics. The ability to charge up a more powerful shot is inherited from the Gauss cannon's precision bolt mod, though the bolt explodes after a short delay. The second mod is, as Hugo Martin said, a "destroyer blade" which can chop through demons.[citation needed]