Difference between revisions of "Barrel" 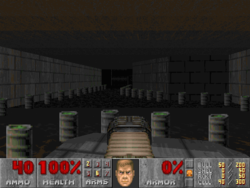 A flotilla of barrels in TNT: Evilution MAP32: Caribbean 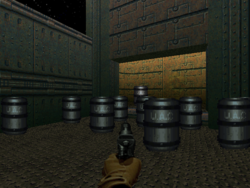 A cluster of barrels in Doom 64 MAP05: Tech Center

The exploding barrel is a relatively common hazard found throughout many Doom levels, and is introduced in the first level of the game, E1M1: Hangar, from the Knee-Deep in the Dead episode. In Doom and Doom II, these cylindric metal barrel contain what appears to be green slime or "nukage", which moves erratically and partially spills out of the barrel given the stains on the metal. In Doom 64 they are a darker gray, with black steel stripes and the UAC logo on them, and are also sealed, with no nukage visible on top. Barrels form part of the "dangerous Doom environment" described in the game booklets:

Exploding barrels: Scattered around the base are drums containing fuel, toxic waste, or some other volatile substance. If your shots hit one of these barrels, it's kablooey time! It might take several bullets to set off a barrel, but a single blast of any of the other weapons usually does the trick.

A barrel takes damage like a monster, and when its hit points reach zero, it explodes, accompanied by the sound effect DSBAREXP. After less than a second of the barrel being destroyed, the explosion inflicts damage to all objects within the blast radius of 128 units, including monsters, players, and even other barrels (exploding one barrel in a closely arranged cluster of barrels often leads to a chain reaction of explosions). Since damage (in hit points) is equal to blast radius minus the distance, an exploding barrel can deal up to 128 damage. Each barrel starts with 20 hit points, which is the same as the trooper. In Doom 64 the explosion graphic is actually a separate actor being spawned on top of the barrel as it disintegrates, and the splash damage also takes slightly longer to trigger.

A useful tactic, sometimes called a "barrel frag", is to wait until one or more enemies are close to a barrel, and then shoot the barrel to detonate it (this tip is given in the user manuals). Barrels are extremely effective and efficient weapons when used correctly: a well-timed chain reaction can produce thousands of hit points of damage from a single shotgun blast, for example.

Damage inflicted by an exploding barrel is attributed to the last actor damaging the barrel without actually blowing it up. This requires a barrel to survive at least one hit, before being able to cause infighting. Destroying an undamaged barrel with one hit does not set the inflictor/target field of the barrel's mobj, and as such it does not propagate responsibility. This also makes it possible to deliberately set off a barrel previously damaged by a monster: this will cause retaliation against said monster, not the one actually destroying the barrel. If done correctly, this can lead to infighting even between monsters of the same type – for example, if an imp takes damage from an exploding barrel previously damaged by another imp's fireball, it will attack and the two will fight to the bitter end. Their fireballs still do no damage, but once they get into melee range they will claw each other to death.

Doom II added the burning barrel. However, these are just animated obstacles. They do not explode or inflict damage in any way. 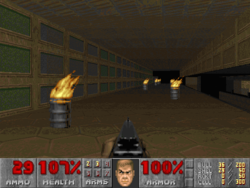 In the IWADs the exploding barrel is first encountered on these maps per skill level:

The IWADs contain the following numbers of exploding barrels per skill level:

Of the maps covered on the Doom Wiki, the following have the highest numbers of barrels in single-player on skills 4-5: 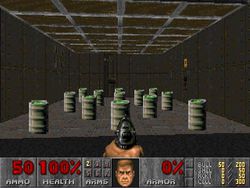 Before barrels are crushed. 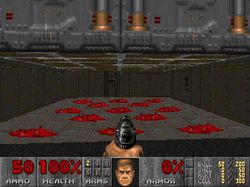 Aftermath of barrels that were crushed.