Difference between revisions of "Berserk" 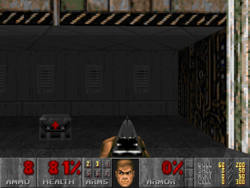 A berserk pack found near the start of Doom E2M2: Containment Area. 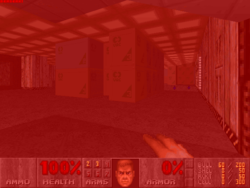 A view of E2M2: Containment Area, just after picking up the berserk powerup, with the player's vision turned red.
This article is about the powerup in the classic Doom series. For other versions of this item, see:

The berserk powerup (called berserk pack in the manuals) is an item that looks like a dark gray medikit. Picking one up greatly increases the damage the player inflicts with his fists, and boosts the player's health to the full normal amount (100 percent, unless it was already 100 or more). It also fills the screen with a gradually diminishing red haze.

The effects can also be gained with the cheat code idbeholds.

Of Doom's items, it is the only one to enhance the player's attack ability in a direct way, and it can thus be considered as an additional attack mode, akin to a weapon. However it is an item in the sense that, when it is obtained, the sound effect for a powerup is played and the HUD message displays the pickup name only. Further, it is counted in the items percentage displayed at the end of each level.

The berserk pack increases the strength of the player's punch attack tenfold, typically until the current level ends or the player dies. The damage increase is powerful enough to often smash humanoids to a pulp, or even sometimes kill a demon with a single blow.

The red haze lasts approximately 20 seconds, except in Doom 64 where it is 3 seconds. This haze is relatively intense (applying palette 3) for seven or eight seconds, and then less so (now palette 2) for the rest of the period. In addition to representing the character's altered state, this haze is a slight drawback of the powerup, due to the reduced visibility. This effect might confuse new players, who often believe that the berserk pack's effects last only as long as the red haze is on screen, through analogy to the radiation suit or invulnerability.

When a berserk pack is collected, the player's current weapon will switch to the fist. While giving the impression that the player has "gone berserk", this may be seen as another disadvantage meant to balance the power of the item. Alternatively it may be an indication or hint as to what the powerup actually does, as an uninitiated player may not otherwise guess that his fist damage has been increased. Players grabbing the powerup quickly may find themselves suddenly unarmed and forced into melee combat until they have the opportunity to switch weapons again.

The precise duration of the berserk effect is 122,713,351 seconds, or around 3.9 years. The berserk counter, which is stored as a signed 32-bit integer, is used to time the duration of the red haze and continues to increment every tic (1/35th of a second) once the berserk is activated, even after the red haze has faded; it turns the power-up off again once it wraps back to zero after 4,294,967,296 increments.[1] 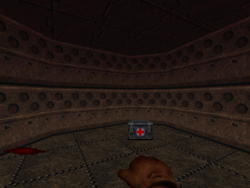 Berserk punching is somewhat more damaging than the chainsaw, since it kills quicker and does not "latch" on enemies. Berserk however has the disadvantage of not doing continuous damage, which leaves the player more open to counterattacks, and requires relatively careful aim.

Due to its power, the berserk punch is best used for hit-and-run situations, running up to the foe to throw a punch and then quickly retreating or dodging. Since punching requires good movement skills to avoid attacks at very close range, newer or slower players tend to save this powerup for healing purposes, while more proficient ones often pick it up earlier to save weapon ammo.

In the IWADs the berserk pack is first encountered on these maps per skill level:

The IWADs contain the following numbers of berserk packs per skill level:

In the 2020 Doom Classic port, the cross is green.

In Doom RPG, the berserk powerup is called a berserker and looks like a red supercharge. Unlike the original, it increases the damage done by all weapons by a factor of 3, and does not heal the player. The increased damage lasts for 30 turns.