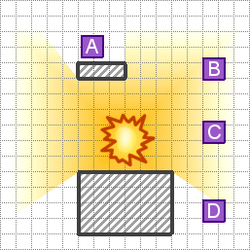 In addition to inflicting damage from the direct hit, blast damage (sometimes called splash damage) attacks inflict radius damage in the area surrounding their explosion (for arch-vile attacks, 70 units; for barrels and player or cyberdemon rockets, 128 units). Because of this, the character using the blast attack will also be damaged if the explosion occurs nearby.

Cyberdemons and spiderdemons are immune to all blast damage (which does not include the tracer damage from BFG blasts). Therefore, a greater number of rockets is required to kill these bosses than might be expected.

The Doom engine uses the same code for all blasts, and even the same sound effect. The blast radius is either 70 or 128 units, and all objects within that radius are examined. For each object that can be damaged, the distance to the center of the explosion is calculated as the greater of the x-distance and the y-distance of the centers, less the radius of the object. The line-of-sight is checked, and if the view of the object from the explosion is obstructed, no damage is inflicted. Otherwise, damage (in hit points) is equal to blast radius minus the distance.