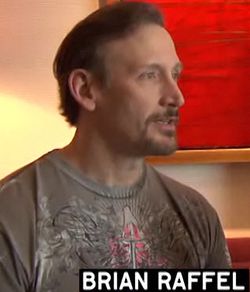 Brian Raffel, alongside his brother Steve Raffel, co-founded Raven Software in 1990, and is the company's current studio head. He served as an artist on the Heretic and Hexen series.

In the spring of 1990, he and his brother Steve Raffel started a small company called Raven Software which went on to produce such hit games as Black Crypt, Shadowcaster, Heretic and Hexen. Activision acquired Raven Software in 1997 and retained Brian as studio head.

Since that time, Brian has continued doing artwork, level design and game design for Raven Software titles. Among his various projects are the massive Call of Duty, Soldier of Fortune, and X-Men: Legends franchises. He also worked on Quake 4.