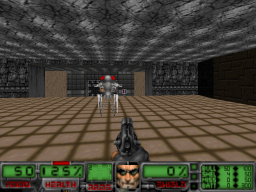 There is a variant of the buzzer known as stealth. This variant behaves just like the buzzer, with the only differences being that it is partially invisible and has 30 hit points. The stealth can spell trouble for a surprised player, as even a single tazer shot is enough to make it explode (likely in the player's face).