Castlem.wad is a single-level PWAD for Doom, designed by Jon Mandigo and released in September 1994. This map is an early example of a castle map, which also tries to be accurate in its design, possessing features common in real life castles, such as: moats, watchtowers, throne rooms, dungeons and a gatehouse. 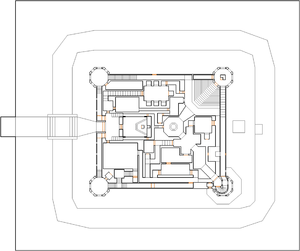 Map of Castlem.wad
Letters in italics refer to marked spots on the map. Sector, thing, and linedef numbers in boldface are secrets which count toward the end-of-level tally.