Difference between revisions of "Catacomb 3D" 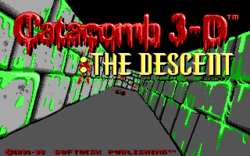 Catacomb 3D (also known as Catacomb 3-D: A New Dimension, Catacomb 3-D: The Descent, and Catacombs 3) is a first-person shooter created by id Software and published by Softdisk in November 1991. The game has a dark fantasy setting, akin to Heretic and Hexen. The player takes control of the high wizard Petton Everhail, descending into the catacombs of the Towne Cemetery to defeat the evil lich Nemesis and rescue his friend Grelminar.

id Software introduced several new concepts in Catacomb 3D, such as rendering walls with texture-mapping and showing the player's hand in the 3D view. Such concepts were further improved and extended in Wolfenstein 3D and Doom.

The origin of Catacomb 3D is Catacomb by John Carmack for the PC and Apple II. This was a 2D game utilizing a third-person view from above, released in 1989-1990. It was followed up with Catacomb II, which used the same game engine with new levels. The first release of Catacomb 3D was called Catacomb 3-D: A New Dimension, but it was later re-released as Catacomb 3-D: The Descent, as well as Catacombs 3 for a re-release as commercially packaged software (the earlier versions had been released by other means such as disk magazines and downloads). The game creators were John Carmack, John Romero, Jason Blochowiak (programmers), Tom Hall (creative director), Adrian Carmack (artist), and Robert Prince (musician). A trilogy of sequels called the Catacomb Adventure Series was produced by Softdisk with a team replacing the id staffers at Gamer's Edge; this included programmer Mike Maynard who would later work on Doom 3, Doom (2016), and Doom Eternal. 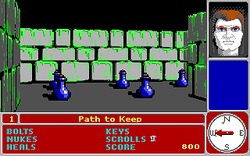 Support for Catacomb 3D was added to the ReflectionHLE source port in November 2014, as of version 0.9.6. ReflectionHLE was initially developed by NY00123 as a source port of Keen Dreams for Windows and Linux. The file formats used in Keen Dreams are similar to those used in the Catacomb games, which prompted NY00123 to add support for Catacomb 3D and the Catacomb Adventure series. Since 2020 also Wolfenstein 3D and Spear of Destiny are supported. ReflectionHLE is inspired by Chocolate Doom and shares the same philosophy of preserving the look, feel, and bugs of the vanilla DOS experience. It originally started with the short-lived name of "Chocolate Keen Dreams", and had been known as "Reflection Keen" for close to 7 years.

Support for Catacomb 3D was added to the CatacombGL source port in January 2020, as of version 0.4.0. CatacombGL is developed by Arno Ansems as a source port of Catacomb 3D and the Catacomb adventure series for Windows. Its main feature is the use of hardware accelerated 3D rendering via OpenGL, with support for widescreen resolutions, a customizable field of view and an uncapped framerate.