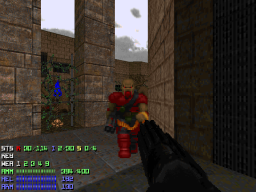 The Chaingunner (sometimes called a Chaingun guy, Heavy weapon dude, Former Human Commando or simply just Commando) is a marine who has been turned into a zombie during the demonic takeover of Earth.

He appears as a burly, dark-skinned man with a shaved head and a goatee, wearing red body armor and carrying a chaingun and a belt of linked ammo coming from an ammo can on his back. When he dies, his left arm separates from the rest of his body.

Geeze, weren't shotgun zombies bad enough? At least when you fade these jerks you get a cool chaingun.

In the instruction manual the chaingunner is called a Former Human Commando.

The chaingunner is first encountered on MAP03: The Gantlet (Hurt me plenty, Ultra-Violence, and Nightmare!) or MAP04: The Focus (I'm too young to die and Hey, not too rough). He is the first of the new Doom II enemies to make an appearance.

The chaingunner attacks by firing his chaingun, which does slightly less damage per bullet than the player's chaingun and whose rate of fire is also somewhat lower. Once he begins to fire, however, he continues until his target dies or leaves his line of sight, or he is stunned (causing him to move) or killed. When slain, he drops the chaingun, which contains 10 bullets (20 on I'm too young to die and Nightmare!). In common with other monsters, although the chaingunner's weapon is shown in his right hand, the bullets emerge from his middle.

Because chaingunners employ ranged attacks in rapid succession which cannot be dodged (even the Spider Mastermind pauses briefly in her tracks before firing, giving the player a fraction of a second to take cover), the player must avoid spending any time at their short or medium range if he possibly can. One shot from the shotgun at close range almost always kills a chaingunner, continuous fire from the player's chaingun at close range almost always prevents the chaingunner from firing, whilst chaingun "tapping" normally limits him to a couple of bullets during the remainder of his life. Chaingunners do not have an ammunition limit, and multiple chaingunners at any distance may well reduce the player's health by 100 or more points in the time it takes to cross a large room; in that situation, it is essential to remain in motion.

The chaingunner's high rate of fire makes him a formidable presence in monster-monster battles; provided he survives the initial blow (Given their 70HP, this is usually the case with an unharmed chaingunner), one chaingunner can actually take down a healthy Cacodemon (often) or Revenant. A Chaingunner can also defeat a Hell Knight, Mancubus or an Arachnotron at close range if the chaingun manages to continuously stun the opponent and prevents return fire. Like all hitscan firing enemies, Chaingunners will also fight each other.

The IWADs contain the following numbers of chaingunners:

In Doom RPG, the Chaingunner appears as the "Commando" monster class. There are three variations, identified by color: