Difference between revisions of "Chainsaw"

A chainsaw in a suspiciously empty passage on MAP08: Tricks and Traps. 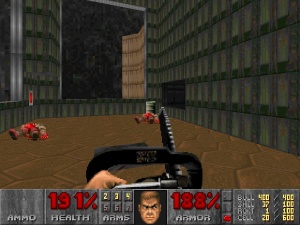 The chainsaw, near where it is found in E1M2: Nuclear Plant.

The chainsaw mutilates enemies close enough to contact. At 525 hits per minute, it is roughly a quadruple-speed fist. Its "rapid fire" works well on enemies with high pain chance, minimizing damage to the player in melee situations. It is often used to conserve ammo or simply because of its gory implications. When picked up, the message is "A Chainsaw! Find some meat!".

It is most effective against demons and spectres, since the player can usually kill them without taking damage. The chainsaw's disadvantage is its slow killing speed compared to the berserk fist, which becomes a liability when facing multiple enemies in open areas. Expert players confronted by a pack of demons and spectres back into a corner and chainsaw them down one by one; if the corner is less than 107 degrees wide, only one demon can attack at a time.

The chainsaw is effectively rendered useless against demons and imps if the game is played with the -fast parameter (such as in Nightmare! difficulty), since these monsters' melee attacks are three times as fast.

The chainsaw first appears in a secret area of the level E1M2: Nuclear Plant, and appears again in secret areas of E1M3: Toxin Refinery and E1M5: Phobos Lab. It is finally found in a non-secret area on E2M6: Halls of the Damned. 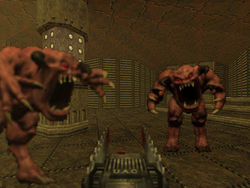 The chainsaw can inflict approximately 94.47 points of damage per second:

The IWADs contain the following numbers of chainsaws: