Revision as of 11:16, 3 July 2017 by Xymph (talk | contribs) (→‎Data: add/update fields per DMINFO)
(diff) ← Older revision | Latest revision (diff) | Newer revision → (diff)
A checked version of this page, approved on 3 July 2017, was based on this revision.
This article is about the Doom item. For the Strife item, see Bullet clip. 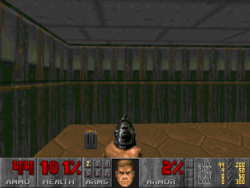