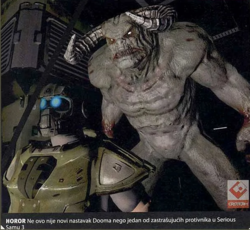 The khnum was introduced in this GamePlay screenshot along with a Doomguy-like character, seemingly aping a similar scene from the Doom 3 tech demo.

The Croteam Doom pitch was a pitch made by Croatian game development studio Croteam to id Software some time before May 2007, detailed in an interview in that month's GamePlay magazine issue (a Croatian periodical active from 2002 to 2011).[1]

According to Croteam's Roman Ribarić, the company became aware that id Software was looking for partners for new projects, in particular one which would be under the leadership of Tim Willits, Kevin Cloud, and Marty Stratton. Though Doom 4 would not be publicly announced until the following August, it is likely that the project had already entered into the planning phase at this point. Accordingly, Croteam offered id Software a pitch in which they would help develop a new game in the Doom series and developed several assets as part of the presentation. However, due to various factors including time zone and language barrier, id Software ultimately rejected the pitch.

In May 2007 Croteam offered an interview to GamePlay in which this pitch was mentioned along with mention of ongoing work on an unannounced "action-tactical FPS project" and the initial announcement of Serious Sam 3: BFE.[1] A series of screenshots were included with the interview which revealed a character somewhat resembling the Doomguy, as well as what would later become the game's "khnum" enemy which strongly resembles the baron of Hell.[2] When the game eventually shipped, it proved to contain additional assets originally created for the Doom pitch, including cybernetic soldiers resembling the shotgun guy and zombieman, and a mancubus-like enemy called the "scrapjack".

While the original Croatian publication cannot presently be found online, Croteam's Daniel Lucic further corroborated this information in a reply on the company's official subreddit in 2020.[3]