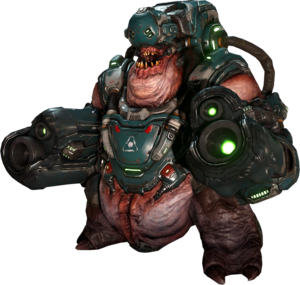 A cyber mancubus.
This article is about the monster in Doom (2016). For other games, see:

The cyber-mancubus is a new monster in the 2016 Doom game, a cybernetic variant of the normal mancubus equipped with heavy armor and enhanced, green-firing plasma weaponry derived from UAC technology. Possessing all of the attack strength of the ordinary mancubus and additional defensive strength, these gigantic brutes seem to offer severe resistance and are best fought with the Gauss cannon or other high-tier weaponry.

An upgrade to the common mancubus, the cyber-mancubus now fires a barrage of four projectiles instead of two, and is equipped with plasma artilleries that leave damaging pools on the ground. Upon coming within melee range of the player, the cyber-mancubus will execute a quake attack to push the player back. All attacks can be avoided by keeping at range with constant movement.

The rocket launcher with the lock-on modification will kill the cyber-mancubus in nine rockets, or three locks. While its helmet reduces the effectiveness of headshots, long range precision weaponry (e.g. HAR, plasma rifle, Gauss, etc.) can be highly effective when targeting its exposed stomach.

The cyber-mancubus was engineered under the direction of Olivia Pierce in the Lazarus Labs and was one of the primary achievements in demon bioengineering as part of the Lazarus Project. The ordinary mancubus' chitinous arm growths were replaced with rifled barrels, increasing the demon's attack range and accuracy. The toxic spew from the creature no longer catches fire due to this change, however, leaving the nature of its attack primarily poisonous. Behavioral modifications were also made to cause the monster to prefer engagement at greater distances where its new attacks have an advantage.

Attempts were made to engineer better fitting armor for the creature, but these were unsuccessful. It would inevitably outgrow anything that was created for it.