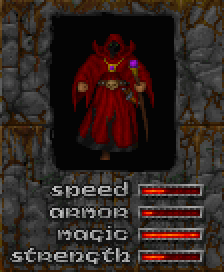 Daedolon the Mage is one of the three playable hero classes in Hexen. He wears red robes with a hood, leather boots, a small belt with a skull girdle, a golden necklace with a purple gem, and carries a staff and a dagger (though he is not seen using either of them at any point in the game). Daedolon is the physically weakest, slowest and can't wear as much armor as the other two characters, however, he works out this facts with his deep study of the arcane arts, giving him impressive magical abilities.

The mage is an interesting, yet difficult class to play in the game, requiring a lot of strategy in order to master his moves. Keeping distance between you and your enemies is essential for the mage, as his low speed and armor make him quite vulnerable to damage; fortunately, Daedolon has an arsenal of ranged attacks which help accomplish this task.