Dark Side of the Mind

Dark Side of the Mind is a 1995 Doom II map by Daniel Norman. Originally released stand-alone on April 18, 1995, it was later incorporated without changes as the fifth and final map of The Final Gathering. The level is extremely non-linear and well-interconnected, designed to be used in deathmatch as well as in single-player mode.

The map makes use of an arch-vile to resurrect previously crushed monsters so as to repopulate an area, but contrarily to The Waterfront there are no author notes telling whether the ghost monster bug was actually desired. 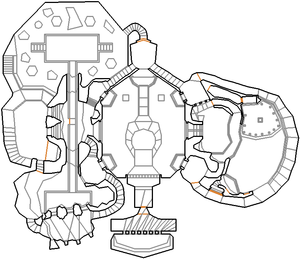 Map of Dark Side of the Mind
Letters in italics refer to marked spots on the map. Sector, thing, and linedef numbers in boldface are secrets which count toward the end-of-level tally. 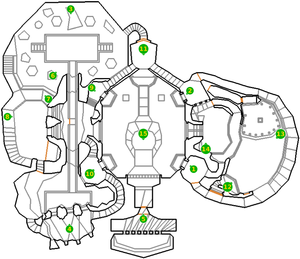 Map of Dark Side of the Mind, with spawn points

* The vertex count without the effect of node building is 1370.