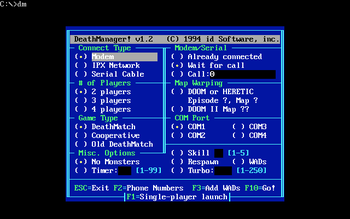 DeathManager! (abbreviated as DM) is a frontend for launching multiplayer games of Doom, Heretic and Hexen written by John Romero and included with the install files of all three games.

The interface for DeathManager shows all of the game options for setting up a multiplayer game on a single screen. These include the network type (Modem/IPX network/Serial cable), game type (Deathmatch/Cooperative/Altdeath), level to warp to, monster options and skill level. Some options are only relevant in certain configurations, for example: number of players (only used for LAN play) and COM port/phone number to dial (only used for modem play).

DeathManager provides a "streamlined" alternative to launching a game using the setup program, which had menu options for launching multiplayer games. The documentation boasts that "there are no menus to navigate, everything is on one screen". The configured options are also automatically saved and restored the next time it is launched (which is not the case with the setup program), so that it is possible to quit a game and quickly restart it.

DeathManager is a 16-bit program that is written in Turbo C - as many of the other Doom utility programs were. Unlike the other utilities, the source code to DeathManager has never been released.

The first version of DeathManager! appeared with the first release (ie v1.0) of Heretic, and it was included with both the Shareware and Registered versions of the game. Timestamped 24th December 1994, this initial version of the program supported Doom, Doom II (which had been released three months earlier) and Heretic.

An updated version of DeathManager was included with Doom v1.8 and v1.9 (both the shareware and registered versions), and with Doom II v1.7a and v1.8. It is not clear what was changed in this version: the interface appears identical and the documentation does not include any release notes that indicate what was changed. This release is dated February 1st, 1995.

Version 1.2 of DeathManager (dated April 9th, 1995) was included with the registered v1.2 version of Heretic and with Ultimate Doom. The interface was also unchanged in this version.

Version 1.3 of DeathManager (dated 25th September, 1995) was included with the shareware v1.2 version of Heretic, and was also included with the Hexen retail store beta. The major change in this version was the addition of support for Hexen. It is unknown why the shareware and registered versions of Heretic v1.2 included different versions of DeathManager; this might have been a mistake.

The support for Hexen in this version is incomplete, as there is no support for choosing the player class. The next version resolved this problem. Version 1.3 can perhaps be seen as a "beta" version that was testing Hexen support.

Version 1.4 of DeathManager (dated to October 13th, 1995) was included with the v1.0 release of Hexen (both with the demo and commercial releases). It fixes the player class problem by making a minor change to the interface: there are now three map warp options (Doom/Heretic ExMy, Doom2 MAPxx or Hexen MAPxx). Choosing the Hexen warp option also prompts the user to select a player class to play as. The COM port selector was made more compact to accommodate the new option. 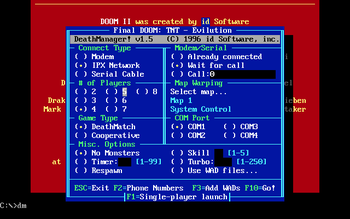 New interface in DeathManager v1.5, being used to configure play of TNT:Evilution.

The final version of DeathManager (dated to 22nd March, 1996) was included with the following:

This version introduced the biggest changes to the DeathManager interface. The complicated warp options were replaced by a single level warp selector, allowing the user to choose the map by name from a list. To accomplish this, the program depends on a configuration file named 'DM.DAT' which lists the levels that can be selected, plus some other options (game name, executable to invoke, and warp type). The program will fail to start up if DM.DAT is not present.

This version of DeathManager also added the ability to start multiplayer games with up to eight players. As Hexen is the only game that supports more than four players, an error is shown if the user tries to select more than the maximum in other games. A variable in DM.DAT controls how many players are supported. DeathManager 1.5 no longer includes an option for the "classic" deathmatch mode, only Deathmatch 2.0 (altdeath), which may be a disadvantage for some players who prefer the old mode.

Following the release of this version, the functionality included in the setup program to launch multiplayer games was removed: trying to start a multiplayer game in Heretic v1.3 or Hexen v1.1 shows a message instructing the user to use DM instead. However, the Final Doom version of the setup program did not include this change. The ability to launch a multiplayer game from a savegame was not removed, presumably because DeathManager does not include the ability to select a savegame (although the documentation lists a workaround for this limitation).