Difference between revisions of "Demon" 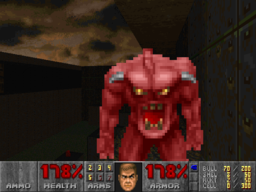 Demon attacking the Doomguy in MAP03: The Gantlet

Commonly referred to as "Piggys" "Pinkies" or "Bull Demons", Doom's Demon is a big, bulky, vaguely humanoid demon. The Doom II manual refers to them as: Sorta like a shaved gorilla, except with horns, a big head, lots of teeth, and harder to kill. Don't get too close or they'll rip your fraggin' head off.

Demons do not have ranged attacks, so they are no threat at long range. However, Demons have a huge advantage over other hellspawn with ranged attacks: speed. Faster than most monsters in Doom (except the charging Lost Soul, the Cyberdemon, and Doom II's Arch-Vile in this respect), the Demon closes distances very quickly, often running towards the player in a zig-zag pattern, making them harder to hit, and helping corner the player. Under Nightmare! or -fast, the Demon moves and attacks twice as fast, thus becoming the fastest monster in the game, and the second quickest to attack (after the Cyberdemon).

In the original Doom, Demons were usually found alone or in small numbers, but in Doom II they were often found in larger packs, making them all the more dangerous to deal with. They emit a loud snarl when they are killed.

The preferred weapon against Demons for many Doom players is the chainsaw; the Demon is unable to attack the player when being struck with the chainsaw, and furthermore the chainsaw does not use up any ammunition. However, the shotgun is also effective since it can cause damage at longer ranges, and the super shotgun can kill a Demon at close range with one blast.

In monster infighting, healthy Demons are able to make short work of former humans and Imps, and are generally the easiest monster to trick into attacking other enemies. Demons actually appear to be considerably less intelligent (and/or more oblivious) than Imps, as they often run around for quite a long time aimlessly before attacking the player. 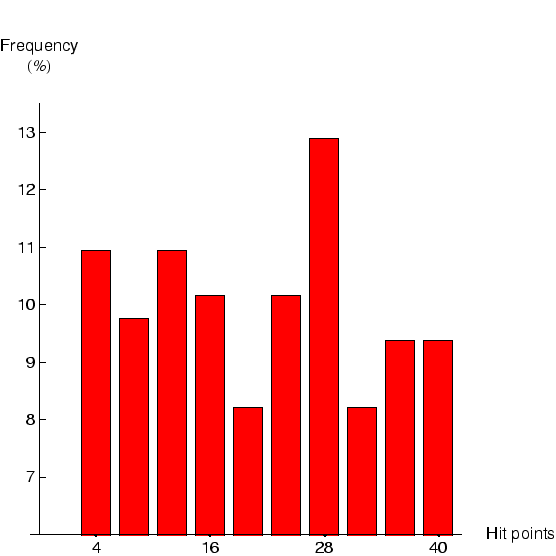 Damage done by a Demon's bite

The IWADs contain the following numbers of Demons:

In Doom RPG, the Demon appears as the "Pinky" class of monster. There are three variations, identified by color: