Deus Vult is a five-map PWAD created by Huy "Doom Marine" Pham and released in May 2004. Intended to be a single, giant slaughter map, Pham needed to split it up into four parts due to the technical limitations of many PCs at the time. Thus the first four maps are the parts, and the fifth is the original map in its entirety.

Deus Vult was influential for two reasons: MAP05 was much larger than any prior map, and the combat was considered very difficult.[1] It was a runner-up in the first Cacowards. A sequel, Deus Vult II, was released by Pham in 2008.

Most battles in Deus Vult take place in arenas with cliffs, teleporters, or hallways separating each area. The first battles feature monsters at the player's eye level, with increasing height differences as the player progresses, as well as the areas and monster counts growing ever larger with each wave.

Pham used the SQUARES map from 1995 as the starting point for development, significantly modifying and expanding the layout to form MAP05. 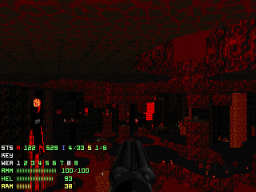