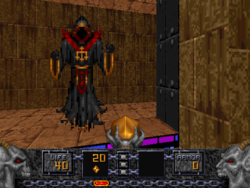 A Disciple of D'Sparil in Heretic E2M9: The Glacier

The Disciples of D'Sparil are common enemies in Heretic, dark wizards wearing tattered, hooded black robes with red and gold accents, and black, seemingly wraith-like bodies. Once human adherents of the Order of the Trident, they lost their humanity by following the dark ways of the Serpent Riders. They attack using a powerful set of magic missiles and can phase in and out of the spirit world as part of this barrage. When killed, disciples explode from within into a quickly dispersing network of purple energy, leaving behind only a small pile of their ruined robes.

The disciple is officially described as such:

"The pupils of D'Sparil's dark magic, these wizards have mastered flight and blink out of the shadow world long enough to cast a crushing wave of magic missiles toward their enemy."
― Heretic instruction manual [source]

The disciple attacks by firing a spread of three magic missiles, making its attacks harder to dodge than most other foes. The magic missiles are fast and cause heavy damage, and are more difficult than usual to avoid via strafing due to their multiple angles. However, the disciple has to remain stationary for a while to prepare an attack, giving the player plenty of advance warning and a chance to counterattack or evade. The Disciple flickers in and out of ghost state while preparing his attack; hence, certain attacks from the player may go straight through it during this time.

The ability to fly grants the disciple a high level of mobility.

When killed, they sometimes drop a Claw Orb, and may also drop a Tome of Power on rare occasions.

In the IWADs the disciple is first encountered on these maps per skill level:

The IWADs contain the following numbers of disciples per skill level: