Difference between revisions of "Doom"

Doom (officially cased DOOM) is the first release of the Doom series, and one of the games that consolidated the first-person shooter genre. With a science fiction and horror style, it gives the players the role of marines who find themselves in the focal point of an invasion from hell. The game introduced deathmatch and cooperative play in the explicit sense, and helped further the practice of allowing and encouraging fan-made modifications of commercial video games. It was first released on December 10, 1993, when a shareware copy was uploaded to an FTP server at the University of Wisconsin.

The development of Doom began in late 1992, with John Carmack writing the new game engine while the rest of id Software was finishing Spear of Destiny (the prequel to Wolfenstein 3D). When the full design phase began in late 1992, the main thematic influences were the movies Aliens and Evil Dead II, and the Dungeons & Dragons campaign the developers had been playing, where the forces of hell invaded the material world. The title of the game was chosen by John Carmack:

There is a scene in "The Color of Money" where Tom Cruse [sic] shows up at a pool hall with a custom pool cue in a case. "What do you have in there?" asks someone. "Doom." replied Cruse with a cocky grin. That, and the resulting carnage, was how I viewed us springing the game on the industry.

Designer Tom Hall wrote an elaborate specifications document called the Doom Bible, according to which the game would feature a detailed storyline, multiple player characters, and a number of interactive features. However, many of his ideas were discarded during development in favor of a simpler design primarily advocated by John Carmack, resulting in Hall's eventually being forced to resign from id Software. Most of the final level designs are those of John Romero and Sandy Petersen. The graphics, by Adrian Carmack, Kevin Cloud, and Gregor Punchatz, were created in various ways: although much was drawn or painted, several of the monsters were digitized from sculptures in clay or latex, and some of the weapons are modeled on toy guns from Toys "Я" Us. A heavy metal/ambient soundtrack was supplied by Bobby Prince.

Doom's primary distinguishing characteristic at the time of its release was its "3-D" graphics, then unparalleled by other real-time-rendered games running on consumer-level hardware. Several new features improved on those of Wolfenstein 3D:

Id's programmers had to make use of several tricks for these features to run smoothly on 1993-vintage personal computers. Most significantly, Doom levels are not truly three-dimensional: they are internally represented on a two-dimensional plane, with height differences added separately (a similar trick is still used by many games to create huge outdoor environments). Doom also offers a low-detail mode (double-width pixels, effectively halving horizontal resolution at the same 320x200 output) and variable screen sizes as measures for improving frame rates on slower PCs, such as those with an 80386 processor.

Doom is a first-person shooter with a background setting that mixes science fiction and horror (of the weird menace style), presented in the form of three episodes, each taking place in a separate general location and played separately. The primary objective of each level is simply to locate the exit room that leads to the next area (invitingly labeled with a red EXIT sign), while surviving all hazards along the way. Among the obstacles are monsters, pits of radioactive waste, ceilings that descend to crush the player, and locked doors for which a key or remote switch need to be located. The levels are sometimes labyrinthine (the automap is a crucial aid in navigating them), and feature plenty of hidden rooms that hold powerups as a reward for players who explore thoroughly. A tally screen at the end of each level (except the last of each episode, which describes part of the plot) helps players aiming for additional objectives, such as clearing the levels of monsters or finding secret areas.

Doom's weapon arsenal was highly distinctive in 1993 and eventually became prototypical for first-person shooters. The player starts out armed only with a pistol, and brass-knuckled fists in case his ammunition runs out, but larger weapons can be picked up: a chainsaw, a shotgun, a chaingun, a rocket launcher, a plasma gun, and the immensely powerful BFG9000. There is a wide array of additional powerups, such as a backpack that increases the player's ammunition-carrying capacity, armor, medical supplies to heal injuries, and strange alien artifacts which can turn the player invisible or boost his health beyond its normal maximum.

The enemy monsters are Doom's central gameplay element. There are 10 types of monster, including possessed humans as well as demons of different strength, ranging from weaker but ubiquitous imps and red, floating cacodemons to the bosses, which tend to survive multiple strikes even from the player's strongest weapons. The monsters generally exhibit very simple AI, and thus most cases must outnumber the player to triumph (although great numbers can sometimes prove counterproductive due to monster infighting).

Aside from the single-player game mode, Doom features two multiplayer modes usable over a network: co-operative mode, in which two to four players team up against the legions of hell, and deathmatch mode, in which the same number of players fight each other.

The first-episode shareware format of the initial release offered a substantial and freely playable taste of the game, which could be distributed with ease on floppy disks, over the Internet, and in CD-ROM packages, thus encouraging players and retailers to spread Doom as widely as possible. By 1995 the shareware version was estimated to have been installed on more than 10 million computers. The full or registered version of Doom, containing all three episodes, was only available by mail order; although most users did not purchase the registered version, over one million copies have been sold, and this popularity helped the sales of later games in the Doom series, which were not released as shareware. The original Doom did eventually receive a retail release as well, when it was offered in an expanded version as The Ultimate Doom (adding a fourth episode).

In addition to the thrilling nature of the single-player game, the deathmatch mode was an important factor in the game's popularity. Doom was not the first first-person perspective shooting game with a face to face competitive mode (MIDI Maze, on the Atari ST, had one in 1987), but it introduced the term deathmatch to games and was the first to use Ethernet connections, and the combination of violence and gore with fighting friends made deathmatching in Doom particularly attractive. Due to its widespread distribution, Doom became the game that popularized the mode of play to a large audience.

Doom was also widely praised by the gaming press. In 1994, it was named Game of the Year by both PC Gamer and Computer Gaming World. It received the Award for Technical Excellence from PC Magazine, and the Best Action Adventure Game award from the Academy of Interactive Arts & Sciences.

An important feature of the Doom engine is a modular approach that allows game content to be replaced by custom patch files, known as PWADs. Wolfenstein 3D had not been designed this way, but fans had nevertheless figured out how to create their own levels for it, and id Software decided to push this phenomenon further. The first level editors appeared in early 1994, followed over the next few years by additional tools which allow most aspects of the game to be edited. Although the majority of PWADs contain one or several custom levels of essentially the same style as the original game, others implement new monsters and other resources, and heavily alter the gameplay; various popular movies, television series, and other brands from popular culture have been turned into Doom maps by fans (although this has led to copyright disputes), including Aliens, Star Wars, The X-Files, The Simpsons, and Batman. In 1994 and 1995, PWADs were primarily available online over bulletin board systems or sold in collections on compact discs (sometimes bundled with editing guidebooks) in computer shops; FTP servers later became the primary distribution method. Tens of thousands of PWADs (at least) have been created in total; the idgames FTP archive at gamers.org alone contains over 17,500 files.

The idea of making Doom easily modifiable was primarily backed by John Carmack, a well-known supporter of copyleft and the hacker ideal of people sharing and building upon each other's work, and by John Romero, who had hacked games in his youth and wanted to allow other gamers to do the same. Not everybody in the id Software crew was happy with this development; some, including Jay Wilbur and Kevin Cloud, objected due to legal concerns and in the belief that it would not be of any benefit to the company's business. 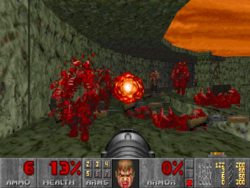 A bloody scene in E4M8: Unto the Cruel

In a press release dated January 1, 1993, id Software wrote that they expected Doom to be "the number one cause of decreased productivity in businesses around the world". This prediction came true at least in part: Doom became a major inconvenience at workplaces, occupying the time of employees and clogging computer networks with traffic caused by deathmatches. Intel and Carnegie Mellon University, among many other organizations, reportedly formed policies specifically disallowing Doom-playing during work hours.

Doom was (and remains) a controversial product due to its high levels of violence, gore, and Satanic imagery. It has been repeatedly criticized by Christian organizations for its diabolic undertones, and prompted fears that virtual reality technology, then in its earliest forms, could be used to simulate extremely realistic killing; in 1994, this led to unsuccessful attempts by Washington state senator Phil Talmadge to introduce compulsory licensing of VR use. The game again made national headlines in 1999, when it was linked to the Columbine High School massacre.

The game was put on the index of the Bundesprüfstelle für jugendgefährdende Medien on 31 May 1994 (date of official announcement). This meant that the game could not be advertised, sold, rented, or otherwise given to minors. This applied to all versions of the game, except for the Game Boy Advance port.

On the 4th of August 2011 the Bundesprüfstelle für jugendgefährdende Medien deleted Doom from the index on request by ZeniMax Media.[1]

Monsters with an asterisk do not appear in the shareware version.