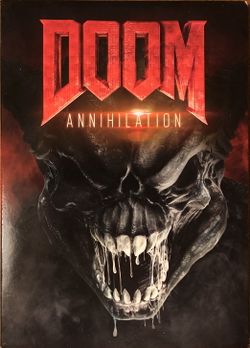 On a United Aerospace Corporation (UAC) base on Phobos, Dr. Betruger prepares to teleport a volunteer from the UAC Nevada Compound on Earth to Phobos by using ancient teleporters known as "gates." The experiment proves successful; however, the subject emerges partially deformed and deranged, screaming, with black fluid leaking from his eyes and mouth. Meanwhile, on a UAC armored transport vessel, the Nola, a group of Marines awaken from cryosleep. They are on a mission to guard the Phobos base. Amongst them is Joan Dark, a disgraced lieutenant with which they are reluctant to work. Joining them is Bennett Stone, a scientist and ex-boyfriend of Joan, who has also been assigned to the base. It is learned that Phobos is a base with four levels, and that it exists in one of the most unstable locations in the Solar System.

Back on Phobos, against Dr. Kahn's wishes, Betruger prepares to teleport himself to the Nevada base after expressing his belief that the prior test subject only had a negative reaction due to presence of prescription drugs in his body. After preparations by medical assistant Veronica Cyr, Betruger passes through the gate. However, the Phobos base suddenly goes offline as monsters emerge from the gate.

Unable to communicate with or enter the base, the Marines receive orders to investigate and restore power. They enter via the emergency entrance and Bennett discovers that the reserve power has been drained to two percent, granting them a mere 90 minutes before the fusion reactor explodes. The Marines, who split into two fire teams, are then attacked by UAC staff who have been turned into zombie-like creatures. During the attack, the Marines find three survivors: Betruger, Veronica, and the base's Chaplain, Glover. Betruger reveals that the UAC has been studying the gates for 30 years in order to colonize other planets. It is believed that the gates were left by an ancient alien race (similar to the ancient Martian civilization from Doom 3) speaking a language related to Sumerian, while Glover believes them to be demons and states that they have opened a portal to Hell. Against Betruger's demands, Joan orders the remaining Marines and survivors to evacuate the base.

Unbeknownst to the Marines, their ship's computer, Daisy (named after the rabbit from the game series), was corrupted by the demonic presence upon docking with the base, in a manner similar to the infection caused by VIOS in Doom II RPG. The ship secretly shuts down services to the Marines one by one, rendering them increasingly helpless against the onslaught of the undead. When the ship's pilot Morgan attempts to take it up to orbit in a bid to restore communications, Daisy lets demons into the ship to stop him.

Upon returning to the transport, the crew are attacked by the imp-like demons, killing several Marines as well as Glover. With the transport disabled, Joan agrees to Betruger's plan to restore power to use the gate to teleport the survivors to the Nevada base. However, she reveals to Bennett that her agreement was a ruse to restore communications. As Bennett works on restoring the base's power, Betruger's behavior becomes erratic and he begins to verbally abuse Joan, revealing that she was disgraced for allowing a terrorist to go free due to poor judgement. Betruger then kills Veronica and seals the Marines in the power core, who are then attacked by numerous imps. With only Joan and Bennett left standing, they plan to stop Betruger from activating the gate.