Difference between revisions of "Doom (film)" 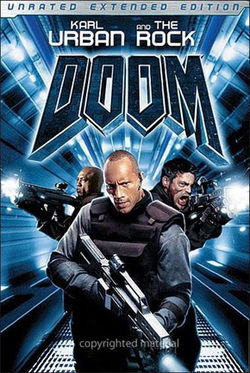 Doom is a film adaptation of the popular computer and video game series. It was released on October 21, 2005 in North America and December 2, 2005 in the United Kingdom. The DVD was released on February 7, 2006.

The film is closer in style to the Doom 3 game rather than the original Doom and Doom II. It is likely that the success of Doom 3 played a part in prompting the eventual production of the film. The film's design also featured the involvement of id Software, helping to ensure that things looked "authentic".

The film stars Dwayne "The Rock" Johnson as Sarge, Karl Urban as John "Reaper" Grimm (the film's version of Doom's protagonist), and Rosamund Pike as Samantha Grimm, John's estranged sister, who is a scientist at the UAC facility. Other characters include Portman, Goat, Duke, Destroyer, Mac, and The Kid, who are other Marines, and Pinky, another UAC employee.

In a September 2005 interview, executive producer John Wells suggested that a second Doom movie could be created if the first was a box office success. The film's production budget was $70 million. It received mostly poor reviews, eventually settling at 20% on Rotten Tomatoes' Tomatometer, [1] and grossed $28 million at the box office. [2] There is no information for a second Doom movie.

Olduvai Research Station on Mars has been shut down and placed under quarantine, for reasons that are unclear but ominous. No one is allowed in or out except the Rapid Response Tactical Squad, a heavily armed Marine special forces unit dProxy-Connection: keep-alive Cache-Control: max-age=0

patched to handle the problem. The RRTS travels to Mars through a wormhole originally discovered by the Olduvai workers, named the Ark.

Upon entering the quarantined area, the Marines discover members of the science team who have changed into hostile zombie-like monsters. Some of them have even become creatures resembling Imps. Some of the creatures attempt to infect the remaining humans. After several Marines are killed, Sarge demands to know more about the research being conducted at the station. Samantha eventually reluctantly explains.

Excavations at an archaeological site have revealed the remains of an ancient race. Although human, they were technologically advanced, and apparently performed research into genetic manipulation. The result was a 24th chromosome. The Olduvai scientists experimented with the chromosome, injecting it into convicted murderers. The test subjects changed into superhuman monsters and the scientists lost control of the facility.

When the Marines fail to protect the wormhole, they must pursue the monsters back to the underground UAC facility on Earth, and find it overrun. Samantha discovers that the disease is selective about who it infects, preferring people with a genetic predisposition for psychotic tendencies.

Sarge decides that they must kill every last human on the base, as they could be infected by the disease. When The Kid refuses to kill a group of women and children who have survived and are obviously not infected, Sarge kills him. One by one, members of the RRTS are killed by the infected humans. Sarge is dragged away while Reaper and Samantha escape.

Reaper is seriously injured by a ricocheting bullet and Samantha is forced to inject him with the 24th chromosome, knowing that the superhuman abilities it brings will heal his wounds. He awakens to find himself alone, and after battling various monsters (including a mutated scientist, Pinky, who has, appropriately enough, become a Pinky Demon), meets with Sarge, who has been infected. The two fight hand-to-hand, and Reaper defeats Sarge by throwing him through the Ark followed by a grenade.

The Doom movie was criticized on a number of points by most people who had played or were otherwise familiar with the games. Many objections had to do with differences between the film and the games:

In addition, the idea of whether a test subject becomes a monster or evolves to a superhuman being (like Grimm) depends on whether he or she is genetically good or evil, and has been criticized as unreasonable. Various arguments, such as the actual existence of a soul, have been made, none with substantial evidence to fully end the debate.

It is believed that all of these points contributed to the film's box-office failure, and its rejection by fans.