Difference between revisions of "Doom 3" 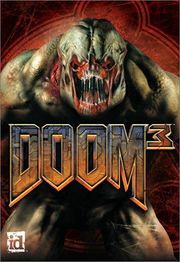 Doom 3 is a retelling of the original Doom, but using a completely new engine with true 3D and advanced physics. Doom 3 is not as “run and gun” as its predecessors, but focuses on atmosphere and graphics. It was criticized mainly for using clichéd horror effects, and the underuse of its physics engine. It is available for the Xbox, PC and Mac.

The Xbox version was sold in both a standard case, as well as a special edition sold in a metal case. The metal case edition had several extras—interviews, G4’s Icons Doom episode, early artwork, and the full versions of Ultimate Doom and Doom II. The Xbox Collectors edition includes two more levels, one in Ultimate Doom (E1M10:Sewers) and one in Doom II (Level33:Betray). This version is now compatible with Xbox 360. 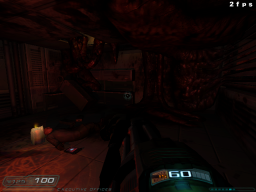 The protagonist is once again a nameless space marine. As it just so happens, he gets shipped to the UAC Mars research facility with Councilor Swann and his bodyguard Jack Campbell on the same day all Hell breaks loose. Within minutes of the invasion, the main military units are destroyed or zombified. It is once again upon the player to stop the forces of Hell from reaching Earth.

The first cutscene displays Swann saying how fed up he is to Campbell about being sent to Mars to check security. Swann says to Campbell he is “…tired of doing damage control every time [he] screws up.” Swann is later seen arguing with the head research scientist in Delta Labs, Dr. Betruger, saying there are too many incidents happening throughout the base, along with frightened employees and rumors of what is happening in Delta Labs.

The player's first mission, assigned to him by Master Sergeant Kelly, aka “Sarge”, is to find a missing scientist that was said to be seen at the old communications facility. When found, he babbles about sending out a warning - “The Devil is real. I know. I built his cage.” With those words, Hell erupts from the gateways, sending a shockwave through the complex, along with glowing pentagrams and scores of evil ghost skulls that zombify nearly every human they come into contact with.

Doom 3’s gameplay was not as fast paced as the games before it. Most of the game is extremely dark, and there is no Light amplification visor. Instead the player must rely on a flashlight that can only be used in place of a weapon. There are few tactics involved other than grabbing the biggest weapons.

Much of the game takes place in dark close-quarters with demons ambushing from every direction. By contrast the Hell section of the game is considered by many to be the best, as it features more open areas and makes use of unique effects.

There are four difficulty levels in Doom 3: Recruit, Marine, Veteran, and Nightmare. The first three are always available. On Recruit difficulty, there are fewer monsters, but it is a negligible amount. The principle difference between the difficulties is the amount of damage the player receives. The chart on the right indicates the amount of damage the player will receive on each difficulty level, relative to the definition files (.def).

Upon completion of a campaign regardless of difficulty level, the player unlocks the "Nightmare" difficulty setting. When playing the game on this setting, the player's health falls in 5-point increments at 5-second intervals until it reaches 25, where it remains steady. Additionally, there are absolutely no medkits throughout the game; the only means of procuring health is either by the health stations, which are still operational, or use of the Soul Cube, which is given to the player at the very start of the game.

The difficulty setting can be controlled by the controllable variable, g_skill. The damage changes take effect immediately, but a map restart or change is necessary for the rest. For example, if a player begins the level on Recruit difficulty and then enters g_skill 3 in the console, immediately their health will begin its drop to 25 and they will receive Nightmare damage. However, the Soul Cube is not given, medkits remain in the level, and the amount of monsters does not increase.

Most of Doom 3's weapons are updated versions of the classic weapons, but those marked with an asterisk are new additions to the series.

In a later cutscene, Swann is seen in a video phone conference with Betruger who is rather calm about the situation. Betruger claims the situation is under control. After deciding on whether to alert the orbital fleet, Betruger addresses you over a computer screen and says that once the fleet arrives, his legion will take the ships back to Earth, thus revealing that he commands the monsters that have overrun the base.

Later in the game, the player runs into a colleague of Betruger, who says that he became obsessed with the teleporters when he figured out Hell existed on the other side. He says he took an artifact called the Soul Cube from the archaeological digs from the ancient Martian civilization into Hell, and demons followed him out.

The player never meets up with the remaining Marines, save for one they meet in a cutscene who dies in the same cutscene, and only reach Swann and Campbell on their deathbeds. Swann was badly injured, and Campbell went on to hunt Sarge. Swann says that Kelly has turned evil and is now on Betruger’s side. After killing Sarge, the player find an archaeologist, who explains that the Soul Cube must be used to stop the demon invasion.

After entering the Primary Dig Site, the player discovers a section of Hell that has creeped into the Martian underground and deep within the bowels of this Hellscape, they encounter the invulnerable Cyberdemon guarding a “Hell hole” — a portal to Hell. Defeating the Cyberdemon, which is only possible with the charged Soul Cube, the Cube seals the Hell hole and the game ends, leaving many questions unanswered.

Most of these maps are quite large and typically require 1+ hours each on a player's first run through the game.

The D-pad arrows serve as hotkeys to select weapons instead of cycling through every weapon in inventory. Four weapons can be assigned. The weapon assigned to each arrow is customizable.