Difference between revisions of "Doom 3: Resurrection of Evil" 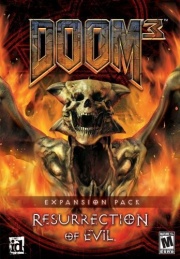 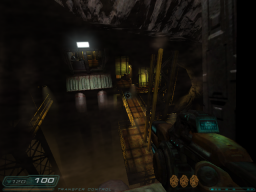 Overview with the Grabber weapon

Doom 3: Resurrection of Evil (commonly abbreviated to as RoE) is an expansion pack for Doom 3 developed by Nerve Software and id Software and released on April 4, 2005. The PC version was sold as an expansion pack, requiring Doom 3 to install. The Xbox version was sold as a stand-alone game, with Ultimate Doom, Doom II, and the Doom II Master Levels as bonuses on the disc.

Two years after the incident on Mars, research has resumed, led by Dr. Elizabeth McNeil. Once more, strange occurrences haunt the facility. A search team breaks into a chamber deep within Mars, finding the Artifact — a weapon from Hell that the Ancients sealed away long ago.

The lead Marine, upon touching the Artifact, awakens it, the blast wave killing his team and reaching into Hell, alerting the Maledict (Dr. Betruger’s new form). The Maledict sends the three Hunters to retrieve the Artifact. Meanwhile, Hell begins to invade Mars once again.

Resurrection of Evil introduces new weapons & monsters that were not featured in Doom 3. It also addresses gameplay concerns that were raised after Doom 3 was released.

The new monsters introduced in the expansion are:

Except for the boss monsters, the Lost Souls & minor variants of the Zombies that appeared in Doom 3, all other monsters in Doom 3 make an appearance in the expansion.

In addition to these differences, the PC and Xbox ports are also slightly different in that the Xbox port feaures health bars for all boss monsters.

The game was put on the Index of the Bundesprüfstelle für jugendgefährdende Schriften (Medien) on 31 May 2005 (date of official announcement). This means that the game can not be advertised, sold, rented, or otherwise given to minors.

Upon defeating the Hunters and gaining their abilities, the Marine shuts down four core systems of Mars to power the old teleporters, sending the marine to Phobos and Delta Labs, then finally into Hell. Battling his way through, the Marine eventually reaches the Maledict. After a fierce battle, the cutscene shows the Marine fire a rocket at the Maledict, only to miss and end up in the Maledict's jaws.

Betruger's head pops out and demands the Artifact. With his last strength, The Marine obliges by shoving the Artifact down Betruger's throat, instantly killing the Maledict and destroying the Artifact, leaving only Betruger's skull behind. The screen fades to white, and Dr. McNeil's voice can be heard saying, “Marine? Marine...Welcome home...”, implying that both McNeil and the Marine may be dead, and in a better place than Hell for sacrificing themselves for humanity. McNeil may be dead because the life-support in the base had to be turned off so that the portal could be powered, and the marine may be dead from his wounds at the end of the battle with the Maledict. It should be noted that the ending was made deliberately vague and open to interpretation.