Difference between revisions of "Doom II" 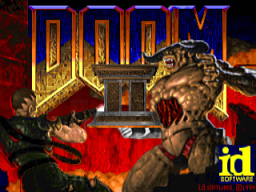 The player once again takes the role of the Marine, who, after being stranded on Phobos and subsequently fighting his way out of Deimos and Hell itself, returns home to Earth — only to find that it too has fallen victim to the hellish invasion.

With all the major cities in the world in ruins, the remaining leaders plan to use spacecraft to transport the survivors of Earth's population. However, the starport is the only way for the ships to depart and the demons have protected it with a force field. All of humanity's remaining soldiers make a desperate assault on the starport, but eventually they are decimated and only the player remains. He continues on doggedly and selflessly, despite knowing that he will be left behind in order to save the rest of his race.

Once the Marine accomplishes this, he is free to live out the rest of his time alone on Earth while humanity hopefully continues on elsewhere. But along the way, he begins to learn how he might finally thwart the invasion once and for all...

Doom II CD from the Depths of Doom collection.

Doom II is not a dramatically different game from its predecessor. There were no significant technological or graphical improvements; gameplay still consists of the player negotiating non-linear levels, picking up keys to unlock new areas, and of course shooting hundreds upon hundreds of monsters.

Unlike Doom, Doom II takes place over a single continuous sequence of linked levels, with brief textual interludes in order to advance the story. The intermission screens following each level show a generic background image instead of a map. The player can carry his weapons throughout the entire game (unless he is killed, of course), rather than starting from scratch on each episode.

The level design, as with Doom, is only loosely based on the areas the player is supposed to travel through. The initial third of the maps have a techbase theme as the player moves through the different military installations of the starport. Afterwards, as the player roams the cities and residential areas searching for the source of the infestation, the levels have an urban look and somewhat resemble terrestrial locations. Toward the end of the game, Hell has begun to merge with reality, and the final levels take place in a nightmarish, Dante-esque subterranean miasma of flowing lava and hot springs.

The player's only new weapon is the Super shotgun. There is also one new powerup, the Megasphere, and a few new decorations, including a burning barrel, a couple of lamps, six hanging mutilated corpses, and three other small pieces of gore.

Doom II required slightly more powerful hardware than its predecessor, due to having more complicated maps with larger fights.

Doom II went on to sell two million copies, making it the highest-selling id Software game to date. There was praise for its many new and varied enemies, and its innovative map design which aimed to be more non-linear than its predecessor. It also introduced the FPS multi-player world to MAP07: Dead Simple, which is regarded as one of the best deathmatch maps ever published.

In general, Doom II was well-received by the gaming community but was regarded in some areas as a disappointment. Its lack of major new features and its fairly homogeneous, sometimes drab level design were the biggest complaints. This was especially in comparisons made to later games such as Star Wars: Dark Forces and Duke Nukem 3D. Some have considered Doom II an expansion pack rather than a true sequel, akin to the future Serious Sam: The Second Encounter as it relates to Serious Sam.

Unlike the original game, Doom II had no demo or shareware versions, and was available only through retail stores. Doom II was thus also known as the commercial version of the game, while the registered version was only available via mail order. (In 1995, however, the original was upgraded and also received a retail release.) Like Doom, Doom II received licensed ports after the fact to numerous additional platforms, including the Classic Mac, PlayStation, Game Boy Advance and Xbox, although most of these ports included levels from both Ultimate Doom and Doom II.

According to the German Strafgesetzbuch §86a, the usage of unconstitutional symbols is forbidden outside of certain contexts such as research, teaching and others. Because the two secret maps Wolfenstein and Grosse use swastikas, the German version does not contain these maps to prevent the game from being the subject of search and seizure procedures (as Wolfenstein 3-D had been). This means that it is forbidden to sell, hire or otherwise give the game to anybody, although merely owning the game is legal.

On 31 December 1994 (date of official announcement), however, the game was put on the Index of the Bundesprüfstelle für jugendgefährdende Schriften (Medien), which means only that the game can not be advertised, sold, rented, or otherwise given to minors. This restriction applies to all versions of the game, except for the Game Boy Advance version.

The German release is engine version 1.666, and doom2.wad is a little bit smaller than is standard. Under MS-DOS, when the player attempts to use the level warp cheat for either of the secret maps, the game instantly crashes.

On the 4th of august 2011 the Bundesprüfstelle für jugendgefährdende Medien deleted Doom from the Index on request by ZeniMax Media.[1]

However, the official announcement state, that not all versions are delisted.

Translated: "Only the American version of 'Doom II - Hell on Earth' has been left in the list, because it contains two additional levels with representations from the indexed and nationwide-seized 'Wolfenstein 3D'".

The levels can be divided up into three episode-like sections, defined by their corresponding sky texture and separated by a textual intermission in addition to the standard intermission screen; as well as two secret levels. Additional textual interludes appear before level 7 (which splits the first sky-based section into two parts), before each of the secret levels, and at the conclusion of the game. In older versions of SETUP.EXE (confirmed at least in v1.5), the "help text" for the level warp feature displays episode names in the status bar: "The Space Station", "The City", and "Hell".

1: Known as Circle of Death on the intermission screen.

2: These two levels do not appear in the German version.

The new episode, No Rest for the Living, originally designed for the Xbox 360 version

Doom II includes all the monsters from Doom:

Doom II also has new monsters, which are:

The Compet-N episode records for Doom II are: