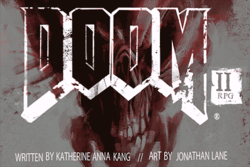 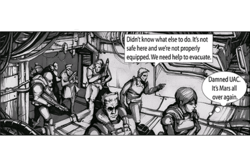 Doom II RPG is the sequel of Wolfenstein RPG, set before Doom RPG. It was released for iPhone and iPod Touch on February 8, 2010. It uses the Wolfenstein RPG mobile engine. It was developed by id partners Fountainhead Entertainment via the merger id Mobile. The iPhone version of Doom II RPG contains a digital comic book.

You can play the game with three different characters:

The game is chronologically set before Doom RPG.[citation needed] Secret experiments have taken place and incidents have happened on various UAC Bases located on Mars, Moon, Earth, Phobos, Deimos, et cetera. While there's not much known about the monster invasion in UAC bases on Mars, another monster invasion happened on Earth's moon. A team of soldiers accompanied by a scientist have ventured to the UAC bases on the Moon to investigate. (According to the included digital comic present in the iPhone version of the game, the Scientist was not a planned member of the expedition; rather, his ship was commandeered by the Marines in order to quickly reach the Moon. This is not confirmed within the plot of the game itself, though.)

Doom II RPG has a new set of weapons, complete with new graphics

The Holy Water Pistol is seemingly rather ironic since it can be refilled in toilets. Also please note the Soul Cube can only be obtained in Hell.

Doom II RPG uses the same hierarchical system for monsters as the previous Doom RPG installment, with classes of monsters individualized by colors. In addition to the classes in Doom RPG, Doom II RPG adds some new classes:

In addition to the new classes of enemies the game has two new bosses; the Pinkynator and VIOS. The Pinkynator is a boss level entity, capable of spawning a room full of Pinkies.