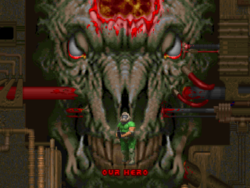 The Doom II cast sequence is an animated sequence at the conclusion of Doom II that displays the monsters found in the game. As the climax of the sequence, the Doomguy himself is presented. The characters are displayed over a depiction of the face of the final boss as the background and the track from MAP31 is played: "Evil Incarnate" from Wolfenstein 3D: Spear of Destiny in Doom II, "Sign of Evil" in The Plutonia Experiment, and "Legion of the Lost" in TNT: Evilution.