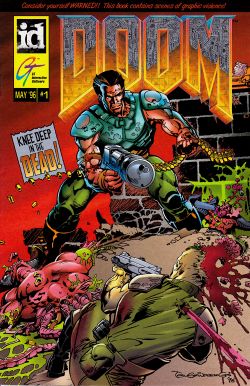 The Doom comic is a sixteen-page comic book written in 1996 by Steve Behling and Michael Stewart, with art and color design by Tom Grindberg and lettering by Edd Fear. All contributors were credited with gory nicknames to fit the theme of the work. It was initially produced by Dana Moreshead for Marvel Comics as a giveaway, according to former id Software business manager Mike Wilson, for the Electronic Entertainment Expo in 1996.[1]

The comic was not originally well received, and was quietly forgotten for several years after its release. However, it gained significant attention in 1999 when Richard "Lowtax" Kyanka reviewed the comic on PlanetQuake (archived 🏛). It later received yet more exposure from the 10 Years of Doom special at Doomworld in December of 2003, where it was published online. Original art from the project was put up for auction on eBay in April of 2004. The over-the-top character of the Doom comic has made it notorious within the fan community.