This is the stable version, checked on 8 July 2018. 1 pending change awaits review.

The DVD release of the 2005 Doom movie in 2006 was accompanied by merchandise releases by First 4 Figures, with a series of statues based on the movie. These included a BFG replica, a Hell knight statue and action figures of Reaper, Sarge, and Pinky, as well as a sewer imp. 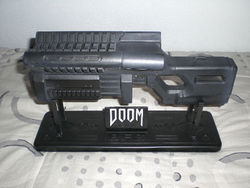 The BFG polystone mini-replica is an accurate rendition of the weapon seen in the movie, but it is not built to scale and does not provide any actual functionality. The box set includes the weapon and a stand for the weapon with Doom logo and "BFG" carvings. The replica was the first in a planned series of Doom movie weapon replicas, but the other planned replicas were never released. 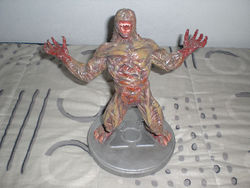 The statue is a resin figure based on the Hell knight monster as seen in the Doom movie. There are two versions of the statue, a common regular version, and a 100-unit limited edition version which was sold exclusively on the First 4 Figures online store. The regular version features the UAC logo on its base, while the limited version's base is a dead scientist. As with the BFG replica, the statue was the first in a series of planned Doom movie character statues, but the other planned statues were never produced.

The Doom movie action figures line includes figures based on John Grimm (Reaper), Asher Mahonin (Sarge), Marcus Pinzerowski (Pinky), and a sewer imp. The figures are all highly articulated, with numerous cuts and movable joints to enable flexible posing. More than four figures were planned, but the additional figures were never released.