The Doom rendering engine (sometimes referred to only as the Doom engine) is the game engine that powers Doom and its sequels, as well as Hexen, Heretic, Strife, HacX, and a few other games produced by id Software licensees. It was created by John Carmack, with auxiliary functions written by Mike Abrash, John Romero, Dave Taylor and Paul Radek. Originally developed on NeXT computers, it was ported to DOS for Doom's initial release, and later ported to several other operating systems and game consoles.

The source code for the Linux version of Doom was released to the public in 1997 under a license that granted rights to non-commercial use, and re-released under the GNU General Public License in 1999. Since then, dozens of unofficial source ports have been created which allow Doom to run on previously unsupported operating systems, often fix bugs in the original implementation, and sometimes radically expand the engine's functionality with new features.

It is not a true "3D" engine (as it is not possible to look up and down properly, and one sector cannot be placed above or beneath another), but is however a fairly elegant system which allows pseudo-3D rendering. When first published, Doom was revolutionary and almost unique in its ability to provide a fast texture-mapped 3D environment. 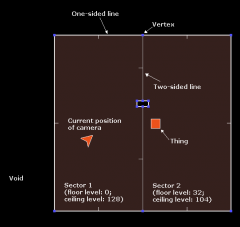 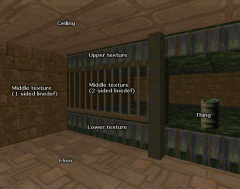 The following is only an overview of the basic structure of a Doom level. Most of the data structures listed here carry extra properties, such as texture offsets, flags for restricting player or monster movement, or possibly even scripting macros.

Viewed from the top down, all levels are actually two-dimensional, demonstrating one of the key limitations of the engine: it is not possible to have "rooms above rooms". This limitation, however, has a silver lining: a map mode can be easily displayed which represents the walls and the player's position, as shown schematically in the first image to the right.

The base unit is the vertex, which signifies a single 2D point. In the diagram to the right, each small blue square is a vertex. Vertices (or "vertexes" as they are referred to internally) are then joined to form lines, known as linedefs. Each linedef can have either one or two sides, which are known as sidedefs. Sidedefs are then grouped together to form polygons; these are called sectors.

Sectors represent particular 2D areas of the level. Each sector has a number of required properties: a floor height, a ceiling height, a light level, a floor texture, and a ceiling texture. To put two different light levels in the same room, for example, a new sector must be created for the second area. A sector must be completely surrounded by sidedefs; therefore, one-sided linedefs represent solid walls, while two-sided linedefs represent boundary lines between sectors.

Finally, there is a list of essentially non-architectural objects in the level, called things. These are used to place players, monsters, powerups, free-standing decorations, obstacles, etc. Each thing is given a 2D coordinate, as with the vertices. Things are then automatically placed on the floor or the ceiling as appropriate to their general type.

Doom makes use of a system known as binary space partitioning (BSP). A tool must be used to generate the BSP data for a level before it can be played. Depending on the size and complexity of the level, this process can take quite some time. It is because of this "compilation" step that it is not possible to move walls in Doom; doors and lifts can move up and down, but never sideways.

BSP divides the level up into a binary tree: each location in the tree is a node which represents a particular area of the level (with the root node representing the entire level). At each branch of the tree there is a dividing line which splits the area of the node into two subnodes. At the same time, the dividing line divides linedefs into line segments called segs.

At the leaves of the tree are convex polygons, where it is not useful to divide the level up any further. These convex polygons are referred to as subsectors (or SSECTORS), and are bound to a particular sector. Each subsector has an list of segs associated with it.

The BSP system is really a very clever way of sorting the subsectors into the right order for rendering. The algorithm is fairly simple:

For a given column of pixels, the process is finished when the whole column is filled (i.e., there are no more gaps left). This ordering ensures that during actual gameplay, no time is wasted drawing objects which are not visible; as a result, maps can become very large without any speed penalty.

The following are not considered structural changes:

The Doom engine renders the walls as it traverses the BSP tree, drawing subsectors by order of distance from the camera (i.e., the closest segs are drawn first). As the segs are drawn, they are stored in a linked list. This is used to clip other segs rendered later on, reducing overdraw. The list is also used later to clip the edges of sprites.

Once the engine reaches a solid (one-sided) wall at a particular X coordinate, no more lines need to be drawn at that area. As this occurs, the engine builds up a "map" of areas of the screen where solid walls have been reached. This allows distant parts of the level, currently invisible to the player, to be clipped completely.

Wall textures in Doom are stored as sets of vertical columns; this is useful to the renderer, which essentially renders the walls by drawing many vertical columns of texture. Because all walls are drawn vertically, the player cannot properly look up or down. It is possible to approximate looking up and down via "Y-shearing", as many modern source ports do. Essentially this works by increasing the vertical resolution, and then defining a "window" on that space. As the window moves up or down, it creates the illusion that the player is looking up or down. However, the view tends to become increasingly distorted as the player looks further and further away from the horizontal.

The system for drawing floors and ceilings ("flats") is less elegant than that used for the walls. Flats are drawn with a flood fill-like algorithm. Because of this, it is sometimes possible (if a buggy BSP builder has been used) to see "holes" where the floor or ceiling texture bleeds out to the edge of the screen. This is also the reason that, if the player travels outside the level proper using the no-clipping cheat code, the floors and ceilings will appear to stretch out from the nearest room(s) through the empty space.

Floors and ceilings are drawn as "visplanes", which represent horizontal runs of texture, given a floor or ceiling at a particular height, light level and texture (if two adjacent sectors have the exact same floor, these can be merged into one visplane). Each X position in the visplane has a particular vertical line of texture which is to be drawn.

Because of the requirement to draw only one vertical line at each X position, it is sometimes necessary to split one visplane into multiple visplanes. For example, consider looking at a floor with two concentric squares. The inner square will vertically divide the surrounding floor, and within the horizontal range of the inner square, two visplanes are needed for the surrounding floor.

Vanilla Doom contained a static limit on the number of simultaneous visplanes, which frustrated many level designers for a long time: if the limit was exceeded, the game would immediately exit to DOS with the message, "No more visplanes!". One easy way to invoke the visplane limit is a large checkerboard floor pattern, which creates a considerable number of visplanes when viewed.

As the segs are rendered, visplanes are also added, running from the edges of the segs towards the vertical edges of the screen. These are extended until they reach existing visplanes. This system is dependent on the segs being rendered in order by the engine; it is necessary to draw nearby visplanes first, so that they can be "cut off" by the more distant ones. If unclipped, the floor or ceiling will "bleed" toward the edge of the screen, as previously described. Eventually, the visplanes form a "map" of particular areas of the screen in which to draw particular textures.

While visplanes are constructed essentially from vertical "strips", the actual low-level rendering is performed in the form of horizontal "spans" of texture. After all visplanes have been constructed, they are converted into spans which are then rendered to the screen. This appears to be a tradeoff: computation time is saved by constructing visplanes as vertical strips, but because of the encoding method used to store floor and ceiling textures, it is easier to draw them as horizontal strips. Because of the nature of visplanes, the conversion is fairly trivial, however.

Each sector within the level has a linked list of things stored in that sector. As each sector is drawn, the sprites are placed into a list of sprites to be drawn. Sprites outside the field of view are ignored.

The edges of sprites are clipped by checking the list of segs previously drawn. Doom sprites are stored in the same column-based format as wall textures, which again is useful for the renderer: the same functions may be used to draw both walls and sprites.

While subsectors are guaranteed to be in order, the sprites within them are not. The engine stores a list of sprites to be drawn ("vissprites"), and sorts this list before rendering any things. Distant sprites are drawn before nearby ones; this causes some overdraw, but it is usually negligible.

There is a final issue involving middle textures on two-sided linedefs, parts of which may be transparent (and therefore fail to clip sprites as another wall would). Such textures are listed and drawn with the sprites at the end of the rendering process, rather than with the rest of the walls.