Doom 0.2 is the earliest known alpha version of Doom released to testers outside of id Software. It is referred to as a "tech demo," and while it is the earliest known version of the Doom engine proper, it does have contemporaries which share some of its technological advances over Wolfenstein 3D in the form of the Raven engine, used by games such as Shadowcaster. It was released on February 4, 1993, when only two months of work had been done on the game. It contains a single primitive level which demonstrates many novel features of the engine, including arbitrarily sized and oriented walls, texture-mapped floors and ceilings, distance fading, and sprites with multiple view angles. Via the alpha's test controls, support for varying light levels and ceiling heights can also be observed. 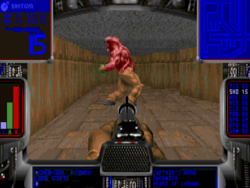 The "technology preview" includes only one small level with no changes in elevation, no doors, and no items. Only three enemies are present—the imp, the demon, and the baron of Hell—and their sprites and programming consist only of walking in place.

The only weapon, an early version of the shotgun, has no effect on the monsters. The texturing is scant, though a few textures and flats were modified and used in the final game. Floor, ceiling, and wall textures can be cycled individually by pressing the number keys 0-9. This may also change the ceiling height or light levels.

The heads-up display/status bar in this alpha is larger and more complex than those that followed. An automap, item list, and weapon stats are among the extra elements visible. However, at this point, all of the data shown on the HUD is purely decorative and does not change. There are two message areas. The left message area has text "Chen: Ooh, I found cool stuff" (possibly meant to be a communications/message window; "Chen" refers to Lorelei Chen, a character from the original design document), while the right has "Captain's hand, Sandwich, Heart of Lothar" (possibly meant to be an inventory window; again, the items are from the original design document). According to programmer John Romero the items were meant to function as different types of keys. The automap shown does not correspond to the actual level layout at all. 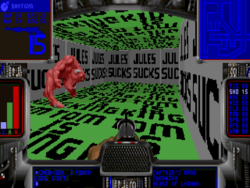 The "Tom is king" and "Jules sucks" textures.

Several of the keys on the keyboard allow various features of the engine to be controlled. Instead of selecting weapons, the 3 and 4 keys cycle the wall textures forward and backward; 5 and 6 do that for the ceiling textures; 7 and 8 for the floor textures, and finally 9 and 0 decrease and increase the ambient brightness level. One selection for the floor and ceiling displays the words "TOM IS KING", while another selection displays "JULES SUCKS" on the walls. Jules is known to refer to Adrian "Jules" Carmack, while "Tom" refers to Tom Hall. Tensions between the two developers are well-known and extensively cited in Masters of Doom by David Kushner, and eventually played a part in the latter's departure from the company before Doom's completion.