Difference between revisions of "Doom v0.4" 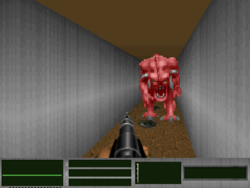 Screenshot from Doom 0.4. The demon sprite is different from the final version.

Version 0.4 included 13 levels, some of which evolved into levels used in Doom: