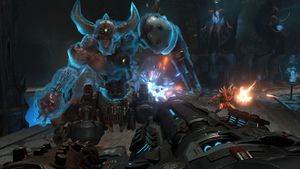 The Doom Hunter is a new monster which first occurs in Doom Eternal. It is a half-demon, half-mechanical monstrosity, reminiscent of Sabaoth, armed with multiple weapons, including a large cannon, a dual-bladed chainsaw, two forward-facing guns which fire plasma projectiles, and a multiple-launch missile system. It hovers and moves via jets that fire below and behind it. The Doom Hunter has 2 forms, the first with the sled, and the other with the sled destroyed. In second form, he loses missiles, plasma cannons and shield, at the same time becoming faster and more aggressive. It has been referred to as an "arch-nemesis" of the Doom Slayer by id Software. A voice-over from Deag Ranak, one of the three Hell priests, indicates that the Doom Hunter is an ancient type of demon specifically created to hunt the Doom Slayer and the Night Sentinels. Though it once stalked the Earth millions of years ago in the Arctic, its present form was designed by this Hell priest, whom it now serves.

The Doom hunter first occurs in a boss fight at the end of the Doom Hunter Base level, first in a one-on-one conflict, followed immediately by a battle with two at once. The Doom hunter's shield, like other energy shields, is weak to the plasma rifle, particularly when combined with the heat blast or microwave beam mods; however, the shield will eventually regenerate as long as the hover sled is intact. When the shield cannot currently be attacked, the sled is always exposed and can be damaged with any weapons. The sled itself is particularly weak against the blood punch.

Once a Doom hunter's sled has taken enough damage, it will break down and the Doom hunter can be heard to say "critical damage." It will then permanently lose the ability to generate its shield, but will instead become faster and slightly more aggressive with its attacks. Breaking the sled is necessary, as the Doom hunter's first life bar represents only the condition of the sled. Once the sled has been destroyed, the boss bar will refill to represent the health of the Doom hunter's organic body and must be fully depleted again in order to defeat the creature.

Though displayed as a concept render with a "final/refinement" designation during the QuakeCon 2018 game play presentation, the monster was not seen in action at that time. During the QuakeCon 2019 keynote, id Software showcased a teaser of the Doom Hunter in game play, revealing it as being able to use an energy shield to protect its upper half from attack, as well as displaying various facets of its attacks and behaviors in brief, including an ability to smash through obstacles in its path and to fire a missile barrage. In an interview it was stated the fight is two-staged. First, the player will have to disable his hover platform. As it is destroyed, the Doom Hunter will lose his missile launchers and plasma guns, detaching from the destroyed battle sled and hovering across the room, attacking the Slayer with its cannon and chainsaw.