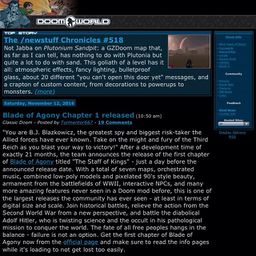 Doomworld in 2016, using the design implemented in early 2002

Doomworld is the oldest unofficial news website dedicated to the Doom games. The site was founded on March 13, 1998 by Andrew Stine (Linguica), Gaston Lahaut (Mordeth), and Javier Heredia (Dukrous); the site began as part of the AtomicGamer network of TeleFragged, LLC. It became an independent website following the shutdown of Atomic Gamer on July 25, 2015. Of the original founders, only Stine and Lahaut remain, but the amount of total members on the staff has grown almost three-fold.[1]

In addition to Doom related news, Doomworld also hosts the weekly /newstuff Chronicles reviews of new WADs uploaded to the idgames archive and a database of the archive with search, user comment, and mirror access capabilities. The site also provides informational resources about Doom and associated games, hosting of Doom websites, and a forum with over 10,000 registered users and 816,000 posts as of December 2009.

Doomworld received some mention in mainstream media in 1999 due to the controversy surrounding the Columbine High School massacre and shooters Eric Harris and Dylan Klebold's obsession with the Doom games.[2][3][4] It gained some additional renown in the same year after Andrew Stine convinced John Carmack to allow the site to redistribute the Doom source code under the terms of the GNU General Public License.

Doomworld provides a set of forums. Discussion areas are provided for Classic Doom, Doom 3, and Doom (2016), as well as the “Everything Else” general discussion forum and areas for discussion of news and hosted sites.

On March 13, 2017, to coincide with the 19th birthday of the site, Doomworld changed its backend codebase, moving from a heavily customized vBulletin 2.2.5 along with a collection of custom-written scripts to the IPS Community Suite.[5] The move was driven by the looming security issues in the old software, which was over 15 years old at that point, and it was decided that the amount of effort that would be required to fix the hundreds of potential vulnerabilities would be better used to configure a more modern backend software. The new software has support for social media features such as username tagging, notifications, a more robust private messaging system, status updates (to replace the semi-hidden "Blogs" subforum), integrated file uploading and sharing, and the ability to give "like"s to content.