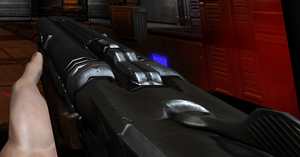 Values shown in "normal damage" and "headshot damage" entries are calculated per pellet. One shell fires unknown amount of pellets.