Doxylamine Moon: Overdose is a single-level PWAD for Doom II, meant for limit-removing ports that was released on December 7, 2011 by Lainos. This map is a sequel and reimagination of Doxylamine Moon (placed 34th on Doomworld's Top 100 Most Memorable Maps list), the second map of Clan B0S's Sacrament. It shares parts of the same layout with that map but follows a different story, set after the events of Sacrament, and is more combat-focused than the original map. A small outro MAP02 with no gameplay, set on a boat, is also included. 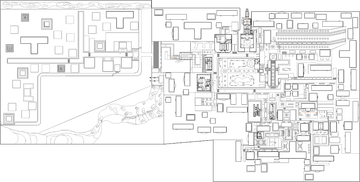 Map of Doxylamine Moon: Overdose
Letters in italics refer to marked spots on the map. Sector, thing, and linedef numbers in boldface are secrets which count toward the end-of-level tally.

* The vertex count without the effect of node building is 27013.