Difference between revisions of "Dread knight" 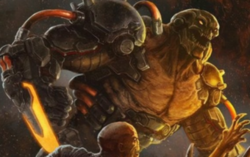 The dread knight is a monster introduced in Doom Eternal. It is a cybernetic version of the Hell knight, with two energy blades attached to its arms.

The dread knight shares a similar attack pattern with its un-augmented cousin, but with a few key differences. The dread knight's arm blades give it a longer melee range than the Hell knight; it can also use the blades to throw an energy wave when the Doom Slayer is at a distance, but this can be evaded with enough maneuverability. When the dread knight performs a leaping slam, it releases a field of harmful energy around it to deter players from getting close while it is vulnerable.

Although the dread knight has higher health than its Hell knight cousin, it remains vulnerable to all of the techniques that are effective against the Hell knight. In general, it should be viewed as the "middle" of the Hell nobles in terms of the threat that it poses.

The dread knight was added to Battlemode as a playable demon in Update 6.66. Favoring a "high risk, high reward" playstyle, the dread knight is nimble with potent offensive capabilities, but its attacks have cooldowns that can leave players exposed. The dread knight can slash with its arm blades at close range, throw energy waves for a ranged attack or use an explosive slam at mid-range; it can also launch a quantum orb which it can teleport to in mid-flight, damaging anything in the dread knight's path. The dread knight can also enter a temporary berserk state which replaces the energy wave with a highly damaging melee attack, as well as increasing its movement speed by 60%.

The dread knight first appeared, unnamed and without elaboration, in the Doom Eternal cover art which was revealed in the immediate wake of the BE3 2019 presentation. The monster's name was rumoured after release of a Slayers Club exclusive piece of art which referred to it as such, but this was not officially confirmed until the QuakeCon 2019 keynote presentation on July 26, 2019.