E1M1: Open Canyon is the first map of episode 1 of Heretic Treasure Chest. It was designed by Przemek Zimny (alterworldruler) and uses a custom music track. 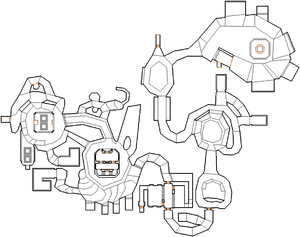 Map of Open Canyon
Letters in italics refer to marked spots on the map. Sector, thing, and linedef numbers in boldface are secrets which count toward the end-of-level tally.

Kill the approaching golems and head due north until you drop into the water, then use the metal lift on your right to climb up to a platform with a switch that will lower some bars below. Drop into the water again and head east through the bars, then follow the stream until you see a building in front of you. Open the door and destroy any golems waiting behind it, then open either of the doors they were guarding to find two more golems guarding a passage leading to an Ethereal Crossbow and another switch. Press the switch, then leave the building and head west to some curved steps which you can follow past some gargoyles and nitrogolems to a tunnel with more golems.

Open the door at the end of the tunnel and destroy two more golems behind it, then head south through a second door and follow the passage behind it past more golems to an undead warrior guarding a third door. Go through the door and head north until you reach a water pool surrounded by a curved staircase, then follow this staircase to the top and follow a dark tunnel north and west until you pass between two waterfalls and enter a cavern with an exit door (requiring the yellow key). Head east to an outdoor area and climb the steps past a number of nitrogolems until you reach a barred window, then turn left to press a switch. The green walls in this area will lower to reveal undead warriors guarding a pillar holding the yellow key - approach the pillar to lower it so you can collect the key, then backtrack to the exit door. Kill the undead warrior waiting behind the door and press the blue switch it was guarding to finish the level.

There are several dead ends throughout the level containing Wand Crystals. Look for passages with green-bordered waterfalls to locate them.