E1M2: Central Computing is the second map of Double Impact. It was designed by Matt Cibulas (RottKing) and Ralph Vickers (Ralphis), and its music track is an untitled mash-up of "Dark Halls", "Suspense" and "The Demons from Adrian's Pen", all originally created by Robert Prince for Doom. The par time defined in the DMAPINFO lump of the edition released as official add-on is 11:00. 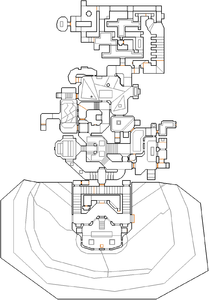 Head straight forward to a staircase and kill the monsters in your immediate vicinity, then head north to a junction with a blue floor and open the gray door to enter a curved hallway. Follow the hallway past zombiemen, imps and a demon to reach a button and push it to open a nearby closet containing more imps and zombiemen, then go back to the junction to find that the tan door has opened leading to a zig-zag bridge over nukage. Cross the bridge and climb the steps on the other side, then open the door at the top to enter a hall with several enemies. Go through either of the doorways in the north-east corner, then step on the lift in the north alcove to go down to a dark maze that contains plenty of monsters.

There are multiple paths leading away from the entry point, but head east to a low passage and pass through to enter the T-shaped room near the center of the maze. There is a narrow hallway on the east side of this room - follow it until you see a wall open in front of you and reveal a demon, quickly kill it (along with a spectre behind you on Ultra-Violence (UV) and Nightmare (NM) skill levels) then continue south through a corridor with bright lights, slaying any enemies waiting in the alcoves to your right as you go, then head round a corner to find some zombies guarding a switch that will lower the yellow keycard elsewhere in the map. Activate the nearby lift to leave the maze, then return to the starting area and head east down some steps to a room with a brown floor. Head through the angled door on the north side to find the yellow key, which is protected by several enemies.

Go back up the steps to the starting area, then head down the south-east staircase this time to reach a junction with a door leading east as well as paths going east and south. Take the south path and follow it to a junction with a yellow key door, open it then head up either staircase to an angled room with zombies and imps. Activate the lift on the north side and ride it up to a blue-floored area, turn right and fight your way past some more enemies to reach a switch in a recess. Flip the switch then take the lift back down and head south through a now-open door to some steps that lead up to the red keycard; taking the key will open four closets around you with imps, demons and zombies. Flip the switch inside the east closet to open the door so you can get back out, then go back through the yellow key door and head east through another door you saw earlier to reach the exit area. Head north through this area to get to the exit door which requires the red key to open and ass through it to find the exit switch, guarded by a spectre and zombieman on Hurt Me Plenty (HMP) along with an imp on UV and NM.