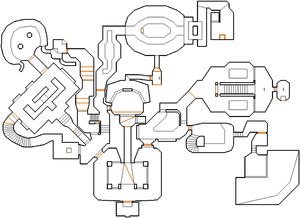 Blocking, mid-textured two-sided linedefs were removed in two areas of the map. The first is the second room of the level with the nukage pit, immediately upon opening the door at the starting point. As in the Atari Jaguar version of the map, they were replaced with impassible "window" sectors with raised floors and lowered roofs. The second area is in the yellow key card secret area. The area inaccessible by the player is no longer visually bounded by grates, but still blocks player movement.