E1M3 is the third map of Sillouhettes of Phobos. It was designed by Michael Lundy and uses the music track "Demons on the Prey" by Robert Prince. 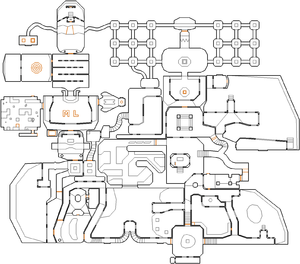 Turn round and go down the east staircase to find a zombieman, shotgun guy and imp blocking your way to a door, then open it to find some more enemies around a nukage pool. Leave the room by the north door and go up some stairs, then turn right at the top and head forward until you reach a door on your left - open it to find a switch guarded by a few shotgun guys and zombiemen that you need to flip. Retrace your steps to the starting point and go down the west staircase this time; at the bottom, go through the doorway on your right to get outside and head north to a wide door that has opened, revealing a room with walkways over nukage that is guarded by demons. Head north then east to find a couple of imps waiting near a door, open it to get back outside then proceed east past another imp and two shotgun guys to some stairs that lead down to a nukage tunnel. Turn left at the fork and go up more steps to another door, which leads to a room with a gray computer structure guarded by demons, then head through the east doorway to find various enemies protecting the blue keycard.

Go back to the previous room and open the north door (requiring the blue key), then head left or right past some shotgun guys and zombiemen until you can drop into a nukage pit. Run through the north doorway to reach an island, then pass through the east or west doorways in this room to reach a small platform with 4 shotgun shells - from here you must run north to get to more shotgun shells, then proceed west or east to enter a small room where some imps are guarding the yellow skull key. With this key, retrace your steps to the island then head south to a pillar with lion switches on its faces; press any switch to lower a teleporter and step on it to get back to the floor above. Head west and south from this point to enter a narrow passage that you should follow until you see a doorway on your right leading to a nukage pool; enter the nukage then go up the stairs on the west side to enter a chamber containing the red keycard.

Head south down another staircase, open the blue key door at the bottom then go through the doorway in front of you and turn right to find a hallway leading to a yellow key door. Open this door and kill the enemies that attack from your left, then open the west door to enter a hallway with zombies. Proceed north through a UAC door to a chamber with a square light, open the red key door to find a shotgun guy and two imps guarding a nukage trench then go down either of the staircases on the north side to find a door leading to an outdoor area with the letters ML (the map author's initials) on the floor. Head to the west side and open the door here to enter a storage room with several small enemies, then walk around the stack of crates on your right to find one or two imps protecting a button that will raise a bridge later in the map. Return to the letter area and go through the north doorway, then slalom through the windowed walls to reach a UAC door at the north end of the room. Open the door and kill some shotgun guys and imps ahead, then cross the bridge you raised earlier and open a door on the other side to find a spectre guarding the exit button.

From the starting point, head east to the room with the round nukage pool then south to a passage with a blue floor. A berserk pack can be found on the west side of this floor.

Before going through the red key door, walk west to find a rocket launcher.

Open the door on the east side of the letter room to find stimpacks, a megaarmor and health and armor bonuses.

Go through the doors on the west side of the penultimate room to find a plasma gun on some scrolling steps.