E1M4: Town Of Witchcraft is the fourth map of episode 1 of Heretic Treasure Chest. It was designed by Samuel Villarreal (Kaiser) and uses the music track "Mist" from Heretic, created by Kevin Schilder. 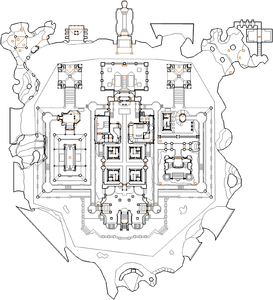 Take the Ethereal Crossbow and arrows in front of you then head north to get outside - you will see a massive fortress in front of you which is surrounded by a moat of water. Follow the water north past various enemies until you reach the north-west side of the level, where you will find a tan chamber with wooden pillars. Approach the north wall of this chamber and six alcoves will open, which contain fire gargoyles as well as pickups including a Torch and a Tome of Power. Enter any of the alcoves and the central column will lower to reveal an ophidian and a Silver Shield - step on the column then go back outside and look south-west to see that part of the stone wall has lowered to reveal a cavern with undead warriors.

Go into the cavern then head north up the steps until you find your path blocked by stone bars, then look south to see a ledge below with a Bag of Holding and a switch. Run forward to drop down to this ledge and press the switch, then drop into the water below and use the teleporter to get back up to the steps. Head all the way to the top, past the stone bars which have now lowered, and walk past another teleporter to a switch. Press this switch and dispose of the weredragons which are revealed behind you, then step on the teleporter to be sent to a ledge with a Silver Shield and two golems in the north-east corner of the level. Drop into the water and head north-west to a curving stone staircase, which you should climb until you reach a tan tunnel with a Dragon Claw.

Follow the tunnel past some gargoyles until you see a silver door ahead - as you approach it the walls on either side of you will lower and reveal golems and undead warriors, plus more gargoyles on hard skill levels. Shoot the recessed switch in the west wall to open the silver door then go down the steps behind it to find undead warriors guarding two switches. Press the switches to lower two teleporters, then step into the teleporter nearest the switches to reach a platform with the green key. Pick it up and step on the teleporter ahead of you to be sent to a ledge in the south-east corner of the level.

Drop into the water then climb the staircase on your left and head west until you see two wooden columns; the silver skull door between them can be used to enter the fortress. Go up the staircase to a dirt courtyard with fire gargoyles and undead warriors then go up the east steps to a stone door - after passing through this door, go up two more sets of steps then turn right at the junction ahead and follow the path past nitrogolems and undead warriors until you reach a set of curved tan steps. Climb to the top and dispose of the waiting nitrogolems and sabreclaws then enter the west building and turn right to enter a small chamber with a Torch. Press the switch in this chamber, then step on the red teleporter next to the switch to be sent to the west side of the fortress.

Go through the stone door in front of you, kill any waiting disciples of D'Sparil behind it then head south through a silver door. Turn left or right and go round the panelled structure in front of you, killing any golems that block your way, until you reach a switch on the south side. Press the switch then go back through the silver door and walk through a stone door that has opened on your right, kill any waiting golems then press the switch in the north-east corner. A teleporter will lower behind you - step into it to return to the east side of the fortress, then turn left (north) and follow the path to a junction. Turn right at this junction and pass under the stone arches, then turn right again to go through a large door; kill the disciples waiting behind the door then turn left or right and go up the staircases to an area with golems. Head south up another set of steps behind the golems to reach the yellow key.

Backtrack to the dirt courtyard where you first entered the fortress, then go through the north door to reach a crossroads in the middle of the fortress. Go through the west door in this area then turn right and go up some steps to a wooden door - behind this is a silver door requiring the yellow key. Open that door and push past some golems, press the switch on the west wall then step into the teleporter next to it to return to the west side of the fortress. Head north to a door you used previously and go through it, then proceed south through the silver door to return to the area with the panelled structure. Use the lifts on the east and west sides of the structure to get on top of it, where the walls have opened to reveal several disciples guarding the blue key.

After taking the blue key, head north-east until you drop to the bottom floor, then head north past a teleporter to find a set of steps flanked by blue key gizmos. Climb up the steps to the north-west tower and kill the undead warriors waiting inside it, then press the switch and dispose of the disciples that are released around you before stepping into any of the teleporters to return to the middle of the fortress. Go through the stone doors to your left or right then head north up a set of steps to an area with several disciples and ophidians. Fight off these monsters while you wait for the metal column by the north fence to lower and reveal a switch which you need to press.

Leave the fortress then go to the north side of the moat surrounding it to find a lift surrounded by braziers, which will lower as you approach. Open the door at the top of the lift and kill all the waiting monsters, then open the stone door at the opposite end of the room to find one or two iron liches guarding the exit switch.

Behind the west door from the dirt courtyard is a pillar with Gauntlets of the Necromancer, and behind the east door is a pillar with a Hellstaff. Go through the west or east doors from the crossroads respectively, then head south to find switches that will lower these pillars.

* The vertex count without the effect of node building is 6405.