Revision as of 06:45, 11 January 2022 by XymphBot (talk | contribs) (Automated edit - add cat w/o soundtrack info)
(diff) ← Older revision | Latest revision (diff) | Newer revision → (diff)
A checked version of this page, approved on 11 January 2022, was based on this revision.
This level occupies the map slot E1M5. For other maps which occupy this slot, see Category:E1M5.

E1M5: Engineering Station is the fifth map of Double Impact. It was designed by Matt Cibulas (RottKing) and Ralph Vickers (Ralphis), and uses the music track "". The par time defined in the DMAPINFO lump of the edition released as official add-on is 11:30. 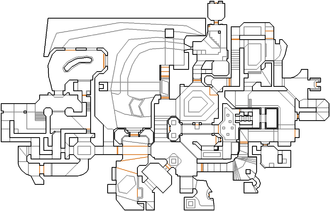 Map of Engineering Station
Letters in italics refer to marked spots on the map. Sector, thing, and linedef numbers in boldface are secrets which count toward the end-of-level tally.

* The vertex count without the effect of node building is 1599.